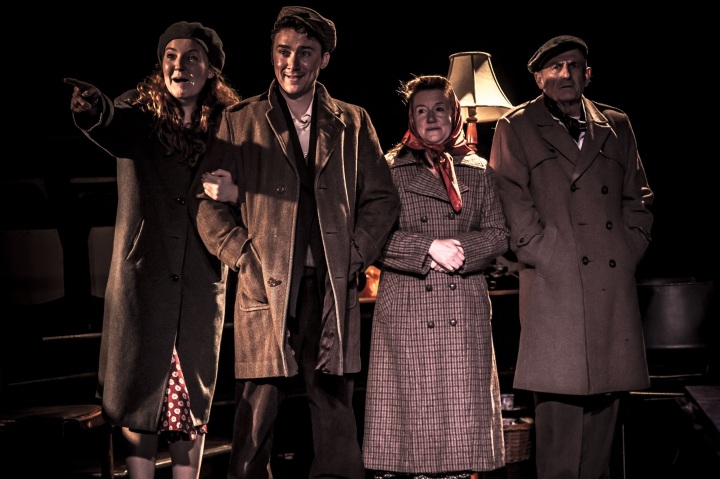 Roy Castleton’s play On Behalf of The People begins as the Second World War comes to an end. Set in a Yorkshire mining town it views the early post-war period through the eyes of one local working class family.

Soldier Tom Mason gets a hero’s welcome from his mother as he returns home from the front. His father is less effusive, “tha back then” he mutters. Tom brings his mother Connie a present, a beautiful red silk scarf patterned with flowers. Its vivid colours and luxuriant design are incongruous within the drab spartan household, like a flash of flaming light, a signal perhaps that change is on its way.

It’s an intimately staged production. The audience are positioned all around and cast members interact with them – red rosettes are given out to be worn, wrapped gifts handed over for safekeeping, election flyers pressed into our hands. A connection is definitely forged – at one point, unprompted, several audience members even raise imaginary glasses to join in a toast to one of the family.

“That’s my town”, says Tom proudly, and there’s a strong sense of how local identity is inextricably linked to the pit, for better or worse. It’s a place that wouldn’t exist without the coal beneath the ground, and the colliery machinery dominates the landscape. The men of the town work down the mine and women spend all day keeping its muck at bay.

The production’s sole visual depiction of life underground fuses the domestic and the industrial. Tom forcefully rotates a dining chair as if it were a piece of drilling equipment while his father turns the parlour’s standard lamp on and off, in the same way he would operate the mine machinery’s button switch. Throughout, Sam Glossop’s hammering and clanging soundscape of colliery noise serves to emphasise the pervasive presence of the town’s main source of employment.

Plotlines focus on tensions within the Mason family. George finds it difficult to come to terms with the fact that his eldest son Judd, who shared his political views most closely, has been killed in the war. Surviving son Tom feels his father blames him in some way for what happened to his brother. Connie may be a supportive wife to George but she is no doormat – when she choses to assert herself, it is her views that take precedence in the home.

For women, it’s a liberating but frustrating period. The war offered Tom’s “lady friend” Liz the chance to work and go to college, enabling her to become a much-needed ‘breadwinner’ for her family. However, as things return to normal, and she considers her future, the career options for women seem to narrow again.

Fault lines run through the family, but they’re also present in the wider social context. The play has a rich seam of history to explore with the Labour Party’s landslide general election victory in 1945 and the emergence of the post-war consensus, with the welfare state and nationalisation of key industries. These huge changes test loyalties, the nature of ‘them and us’ is subtly evolving and the play ponders some difficult questions. Were people too willing to see the struggle as being over at that point and settle for what they got? How does someone balance their desire to apply for the better-paid management jobs that are suddenly available to them with their socialist beliefs? Did the unions’ working practices sow the seeds of their eventual decline?

Although On Behalf of The People was originally commissioned by the National Coal Mining Museum, it has no intention of being a museum exhibit itself. As George Mason berates the Daily Mail for its anti-Labour, union-bashing coverage and rages at the free market that “makes folks poor and blames them for their poverty”, Castleton’s script shows how even 70 years later some things never seem to change. It also holds a cracked mirror up to its modern-day audience – as it breathlessly celebrates a hard-won new post-war era, with abundant social housing, free healthcare, more leisure time and better job security the play almost begs us to look at where we find ourselves now.

Castleton’s script is lean and polished, and its willingness to incorporate a range of perspectives makes it a rich and rewarding experience. Ray Ashcroft offers a crowd-pleasing turn as gruff, plain-speaking trade unionist George, and there is nothing wrong with that, though it undoubtedly benefits from being surrounded by subtler pleasures. Kate Wood’s Connie is wise and dignified, and her understated performance provides some genuinely moving moments. As Tom and Liz, Danny Mellor and Lizzie Frain skillfully depict two young people at a crossroads in their lives. Both confident in themselves, and unwilling after all they’ve been through, to simply do what’s expected of them.

It’s a powerful piece of story-telling, served up with whole-hearted commitment. Cleverly, the script never alludes to what’s to come, it leaves the audience to apply their own tarnish to the family’s dreams for the future. “We’ll all be ‘right” they say, their arms linked, stood together in solidarity, and brimming with optimism. If only they knew.

On Behalf of The People can be seen during the Greater Manchester Fringe Festival at the People’s History Museum, the International Anthony Burgess Foundation and Waterside Arts Centre. 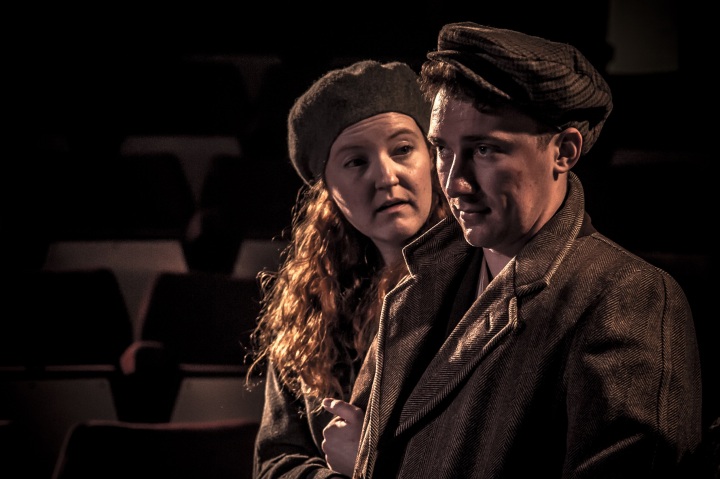