Staging Samuel Beckett’s Happy Days at the Royal Exchange, in the round, poses an obvious challenge – what to do about that “expanse of scorched grass rising centre to low mound”. Director Sarah Frankcom must have been toying with several ideas initially, when tickets first went on sale only one side of the auditorium seating was available to book. Fortunately, designer Naomi Dawson’s solution, with Beckett’s low mound on a revolve, allows the production to inhabit the whole space. This works much better than you might expect. It’s a slow and steady rotation, striving to be unobtrusive and the initial novelty quickly evaporates. As Winnie’s monologue progresses, the almost imperceptible motion seems to remind us that despite the solidity of that mound and the earth beneath, the world spins on and time ticks away.

As she moves, big banks of lights mercilessly pursue Winnie. A hot orange glow, with an accompanying retina-scorching brightness. A world of “blazing light” and a “great heat”. Compacted layers of detritus encase Maxine Peake’s Winnie, pieces of plastic sheeting protrude from the scorched grass and all around is a dark pool of reflective water, an unforgiving black mirror.

Both the design and production itself bring added ambiguity to Beckett’s words. Is Winnie trapped within a stultifying marriage, overcome by the march of time or at the mercy of an overheating and polluted planet. As she examines and places items methodically around her, is it a reassuring routine, an attempt to bring order to chaos, a distraction from torment or is she fiddling around in her handbag while the world burns?

This Happy Days is the result of Sarah Frankcom and Maxine Peake’s desire to do “something funny”, and Peake’s Winnie undoubtedly has funny bones buried beneath that pile of soil. Recalling her first kiss, “Very bushy moustache, very tawny. Almost ginger! Within a toolshed, though whose I cannot conceive“, there’s a touch of Patricia Routledge’s Kitty in her clipped and controlled comedic delivery.

It’s a rigorous and rewarding performance, every line invested with the same care and attention Winnie gives to the contents of her handbag. Buried in soil but spotlessly turned out, in an elegant pink gown and jaunty feathered hat, this a woman keeping up appearances and making the best of it. Charming and chirpy, flirty in manner and frilly of parasol. But for all the breeziness and “what a blessing” there’s an accumulating sadness and flashes of desperation.

Beckett’s “piercing bell” is here unnervingly institutional, like a prison buzzer. When Winnie opens her parasol, in a vain attempt to shelter from the sun, she holds it as high as possible, straight up and at full stretch – like a desperate white flag of surrender, a cry for help. As she gazes at a ballerina in a music box, its mechanical dance giving the impression of progress while fixed forever to the same spot, it seems to mirror her own bleak predicament in miniature.

The spinning Winnie isn’t the production’s only divergence from Beckett’s notoriously specific directions. As the soil reaches neck height, the stage circles decidedly more slowly and Peake’s face is broadcast in monochrome, revealed in close up via a cluster of suspended screens. It’s dystopian and distressing, every tremble of the lip and each glistening teardrop is magnified. Here, technology serves to intensify the impact of the performance rather than distance us from it. It’s an oddly apt intervention, that could trace a lineage back to Beckett’s later works. After all, how far removed is a face isolated within a screen from a disembodied head or a pair of spotlit red lips mouthing words in darkness.

Peggy Ashcroft believed that “Winnie is one of those parts…that actresses will want to play in the way that actors aim at Hamlet – a ‘summit’ part“. Maxine Peake may now be in the unique position of having tackled both. Her performance here is gripping. Frankcom’s production is strikingly distinctive and intelligently layered, and Peake’s perky yet powerfully poignant Winnie is its luminous linchpin. 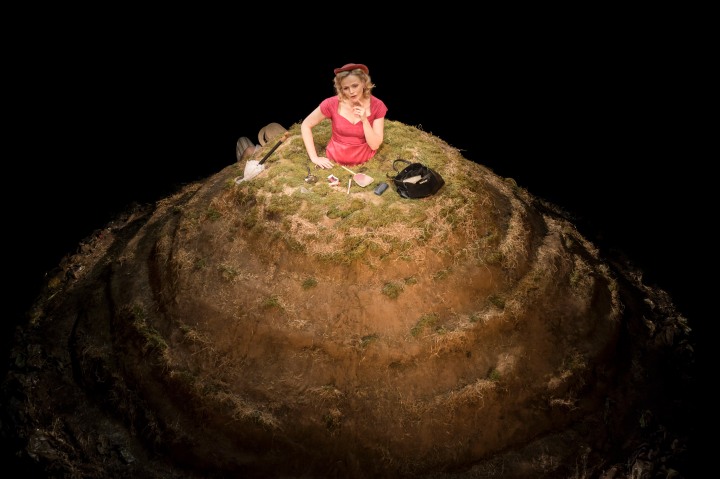 What’s your favourite reference in the Happy Days rehearsal room?

We’ll start: it has to be Kim ‘Don’t Start!’ Woodburn pic.twitter.com/rPGnXR7U5A