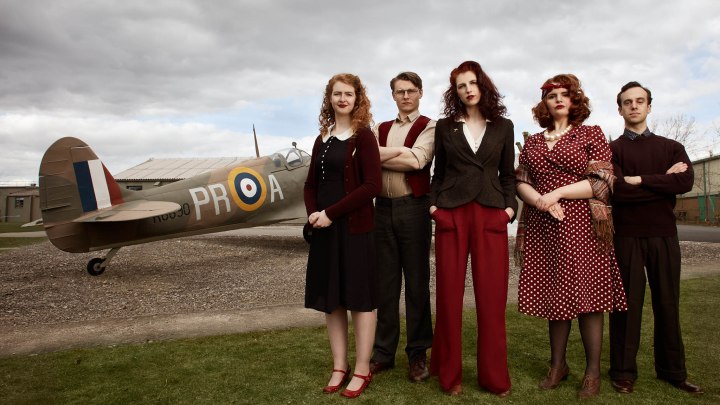 “I see you stand like greyhounds in the slips,
Straining upon the start. The game’s afoot”.

Time and Again Theatre company premiered Greyhounds as part of last year’s Greater Manchester Fringe Festival. It’s now heading to the Edinburgh Fringe in August. In advance of that, Manchester audiences had an opportunity to see it again in a revised form, and as a much longer play with a brand new second act.

Greyhounds revolves around the inhabitants of a small English village during the Second World War. The first act takes place within Shuttlefield’s village hall where five people are working on an am dram production of Henry V. Jolly good egg Ruby is enthusiastically leading her fellow cast members into a battle of sorts with Shakespeare’s text, as they work out how they will put on a play consisting of 52 characters with a cast of 5. They’re an interesting bunch – an injured pilot, a cheery young Londoner, a quiet young man and Ruby’s blunt and brilliantly clever sister Katherine.

While the characters are putting on their play to help raise money for a Spitfire, their patriotic motivations perhaps also mingle with more selfish ones, with the rehearsals offering a welcome opportunity to get away from the every day grind of life during wartime. The play is full of such ambiguities and blurred lines. The amateur actors possess an abundance of back stories and narratives through which the play considers concepts such as heroism, cowardice, patriotism and treason. The impact of the war on women is explored. One character’s evacuation from the city to village life provides her with a means of escape from an abusive relationship, while other women find their skills and knowledge suddenly valued and in demand when men are in short supply.

The play they are rehearsing is similarly open to multiple interpretations, and the words and themes of Henry V seep into proceedings. As the rehearsals for the village hall production begin, Shakespeare’s “your humble patience pray, gently to hear, kindly to judge our play” could refer to the actual play being rehearsed, the planned village hall production or Greyhounds itself. This sense of a play within a play, of layers and variations, runs throughout the staging and it’s surely no coincidence that a set of matryoshka dolls appears in the second act. One of the characters references the lineage between some of Winston Churchill’s speeches and Henry V, and the play’s words are quoted and mulled over. At certain moments, the lights dim and individual members of the cast are bathed in red light, as they “stiffen the sinews (and) summon up the blood” to recite key dramatic speeches. In these moments, with just them and the Shakespearean text, the bloody spotlight picks out the intricacies of the language but also reveals something of their character’s inner thoughts and turmoil.

Greyhound’s strength lies in Laura Crow’s tight and thoughtful script with its collection of wonderfully drawn characters. Shuttlefield is beautifully constructed, with colourful stories of village life and unseen neighbours, underpinned by carefully researched period detail. Wartime privations permeate the gossip and chatter, with talk of the regulated use of bath water and “dreams of garibaldis and custard creams”.

“The future is cold and lonely. The past is just a story. Stories make us feel safe” says Ruby. Shuttlefield is located in a world familiar from so many other stories, and it’s a community held together by good humour and hope. There’s no denying that there is comfort to be found here, but it doesn’t collapse into cosiness.

The womenfolk of the village are especially well-drawn, and imbued with a complexity that can seem lacking in their male counterparts. In particular, the highly intelligent though emotionally indifferent Katherine Winters brings an additional dimension to the story. To a modern audience she is recognisably on the autistic spectrum yet in 1940s England she is characterised as a difficult woman (dangerous even). “A mind like yours is a grand old thing but it will get you into trouble”, she is warned.

Care and attention has gone into the set design. As well as the more usual fare, such as the period costumes or morale-boosting posters there are also more intriguing things to spot. The boxes containing gas masks, carried by everyone to rehearsals, look otherworldly hanging together by their strings on the village hall coat stand. The copy of Frida Khalo’s The Two Fridas and the empty birdcage in Ruby’s front room are both there to tell us something.

What started life last year as “a big little play” is now a full-length production with a new second act that jumps forward four years to VE Day to show how the character’s lives have changed during the war years. Some of the minor problems noted during its initial run, in particular the clunky device previously used to show time progressing between scenes, are now long gone. Director Jacqueline Wheble brings a seamlessness to the story-telling, and the new second half flows even more smoothly and confidently.

There’s still a tentativeness to some of the acting at this early stage, although Laura Crow as Katherine and Fiona Primrose as Cockney show girl Nancy provide a couple of extremely accomplished performances. However, Crow’s sharp and subtle script carries everything along with it, creating a place and people so fully-formed and engaging that you find yourself reluctant to let go of them when the lights go out one last time. 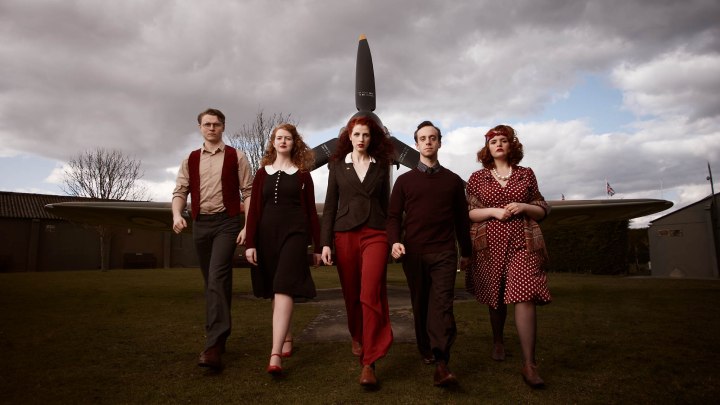