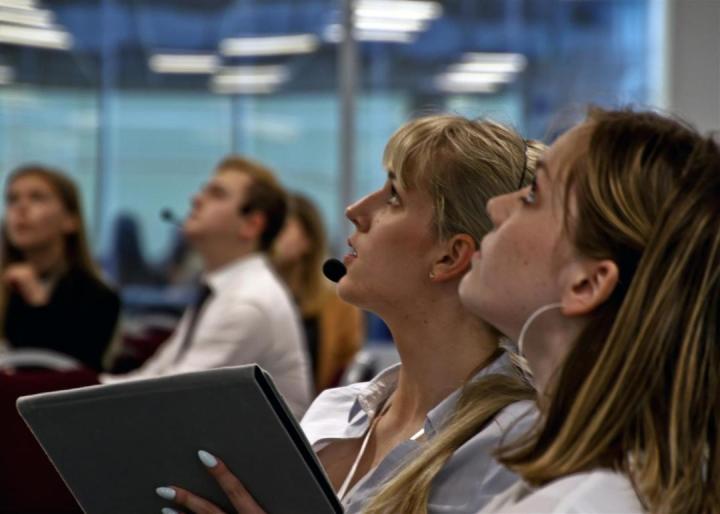 As the tram winds it way from town to Salford Quays, the view from the window is a rapidly evolving blur of construction sites and new buildings. As well as the seemingly never-ending apartment blocks, glass fronted office complexes and trendy business parks loom large. What goes on inside those smart-looking new workplaces with their gleaming surfaces, immaculately landscaped surroundings and ever-present security guards?

For their debut performance, The Lowry’s new group of young theatre makers, The Offstage Ensemble, have taken up residence at Exchange Quay. With the help of Dante Or Die, (who know a thing or two about making wonderful site-specific work), they’ve created Bright Futures –  a workplace both recognisable and (hopefully) unlike any other.

On the premise that the audience are Bright Futures interns for the day, we get to observe the Junior Sales Team in the feverish run up to their much-anticipated Performance Review. As baseless rumours of upcoming dismissals spread, a competitive atmosphere laced with panic and back-stabbing takes hold.

Elements of promenade and immersive performance draw us closer into this office on edge. A small team of tabard-wearing cleaners will occasionally break off from their slapdash wiping down of surfaces, to guide us around the space.

Staff tap manically on their tablets and babble purposefully into their headsets. Walls are adorned with signs designed to inspire industrious endeavours (“WE’RE SELLING PARADISE“). All reassuringly corporate, and ‘on brand’. Yet it doesn’t take long for cracks to show. There’s an incisive sequence where characters mouth their true venomous feelings for their fellow workers while composing polite emails to them filled with professional niceties.

Overhead the rows of strip lights glare down, leaving everyone in clear sight and exposed to scrutiny. At Bright Futures it’s not just fellow colleagues watching, ready to pounce on any weakness or flaw. The company’s surveillance device The Tracker monitors workers’ performance, and a hectoring tannoy keeps everyone in line.

Although the production could benefit from more space and time to allow characters to become more clearly defined, there’s an entertaining mix of people inhabiting the office environment. While some are trampling over their colleagues to ‘achieve success’, others are happy to daydream, flick through magazines at the photocopier, or do quizzes on Facebook about what sort of cat they are.

Exchange Quay’s tinted windows reflect the cast and audience back at themselves. From certain angles we all seem to multiply out into infinity. This hallucinatory view adds to the production’s wonderfully surreal and unsettling undertones. Bright Futures’ sales staff will occasionally leap onto chairs, briefly break into dance routines, or prowl across the office on all fours in search of prey. Oddly, the cleaners are all called Pam. A Health and Safety announcement proclaims “It’s every man for themselves“. Through the windows we glimpse a mysterious masked group waving placards at us from the plaza below – more subversives than protesters, their scrawled messages sow seeds of doubt. “DOES THE OFFICE BRING YOU JOY?“. “ARE YOU SURE ABOUT THAT?“.

It all adds to the feeling that everything isn’t quite right, and something will have to give. The performers explore not just the stifling nature of office culture, but also the pressures of lives lived online. Siren voices warn that in the pursuit of team targets, career goals or Instagramable perfection, it’s possible to lose sight of who you genuinely are. In the bland homogenised world of Bright Futures it can feel dangerous to be passionate about anything, or stand out as different.

Inventive, energetic and ambitious – Bright Futures is a bold and eye-catching beginning for The Lowry’s Off-Stage Ensemble. Fittingly, despite its cautionary messages, it’s a show that ultimately looks forward with hope.

In the production’s most heartfelt moment the cast seem to awaken from a deep sleep, and one by one they tell us two things about themselves. Firstly, something they do well or are proud of. Quirky personal achievements – such as being good at sudoku, walking in 6 inch heels, making the best hot chocolate, or creating amazing patterns with the lawn mower. Then they take a leap forward to share their unfiltered ambitions, their unfettered dreams of a bright future – as a scuba diver, an actor, a detective, a CEO, a Nobel Prize-winning scientist… The list goes on.