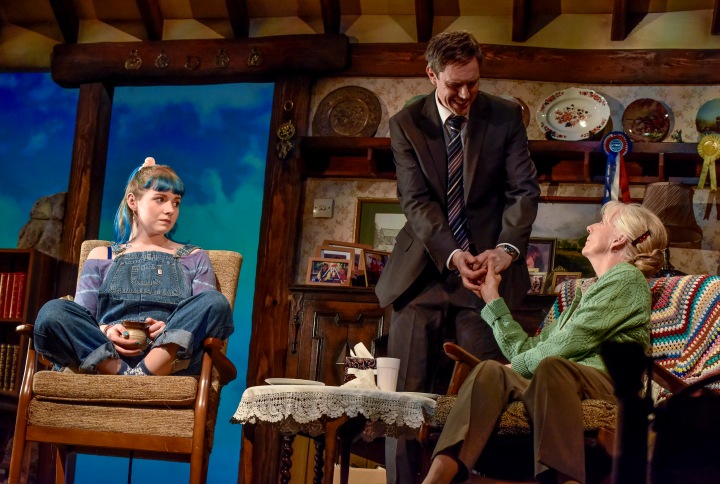 Two comfortable armchairs in front of the fire. Shelves housing collections of plates, books and china. Prize-winning rosettes proudly pinned to the wall. Family photographs jostling for space on the mantlepiece. A lifetime of memories all out on display.

This is Edie and Arthur’s home, and it’s quickly established that they are very happy together here, within these walls. Unfortunately, the advancing years are starting to have an impact, with Edie’s mind unraveling and Arthur’s body weakening.

Barney Norris’s play begins on a “red-letter day” for them. They’re expecting a visitor to their farm-house, as they begin to contemplate an uncertain future. Stephen, their only son, lives with his own family some distance away, and he has suggested that his parents take part in a scheme where they offer a home to someone in exchange for them helping out with Edie’s care. A young woman has been matched with them, and her arrival is imminent.

Kate, with her blue hair, cheerful manner and youthful outlook is like a breath of fresh air within the long-established household. Her arrival doesn’t precipitate any major shocks or revolutionary upheaval, Visitors isn’t that sort of play. People adjust, things change slightly for the better and life carries on.

Eventually, however, as both Edie and Arthur’s health starts to get worse, they must face up to the possibility of leaving their home. It’s somewhere they have a deep connection to, having lived there all their married lives. Edie can even trace out the trajectory that the sunlight will follow as it moves through her home each day.

On one level, Norris’s play is a portrait of a long and loving relationship in its twilight years, but it’s also an exploration of different generational attitudes and wider social change. There’s a strong sense of the end of an era. Arthur has almost unthinkingly carried on a family tradition, living in the farmhouse and working the land like generations before him. However his son Stephen feels no such attachment to his place of birth. While Edie and Arthur have remained in one place, their son moved to a new life in a different town as soon as he could, and Kate has already based herself in several different locations since leaving college.

Yet Stephen’s different expectations and wider perspectives haven’t necessarily brought him the happiness his parents continue to enjoy.  Similarly, while Kate seems to be at ease with a more connected world and the opportunities that can provide, she also feels restless and unfulfilled as she moves from each new place and job to the next.

Visitors is subtle, unassuming even, and all the better for it. Its carefully constructed intimacy, and willingness to celebrate seemingly mundane lives, can however result in periods where characters don’t stray too far from their armchairs. So to an extent it relies heavily on strong performances.

Fortunately the cast of four are very engaging. Kitty Douglas’s Kate is cheerful if slightly troubled, and as Stephen, Ben Porter elicits sympathy as he slowly lays bare the dissatisfaction and damage hiding beneath an awkward shell. Liz Crowther is a surprisingly radiant Edie, facing up to her challenges without self-pity, still able to feel grateful for the life she has been gifted, as well as the time she has left. As her husband Arthur, Robin Herford is blunt and practical, yet increasingly stoic, as he realises this is one situation that he can’t somehow fix. Ultimately, although Edie and Arthur may refer to themselves as a “pair of worn out old dish cloths”, it is their relationship that powers the play. Together, as the loving couple, Crowther and Herford, are capable of both warming the heart and breaking it.

Sammy Dawson’s delightfully detailed set is a cluttered oasis of welcoming warmth, somewhere lived-in, and with stories to tell. The use of projected images against the main backdrop as some sort of mood board for Edie’s mental state is less successful – and feels incongruous within the context of the meticulously created domestic setting.

Director Chris Lawson ensures that despite the gentle pace and cosy setting, the production never flags, and his keen eye draws out the play’s many layers. Despite Edie’s situation, Visitors is not ‘a play about dementia’, but a story about a group of people coming to terms with frailty, and impermanence. Not a meditation on approaching death, but more of a reminder that all of us are ‘visitors’ in life, and we might want to reflect on how to make the most of the time we have.