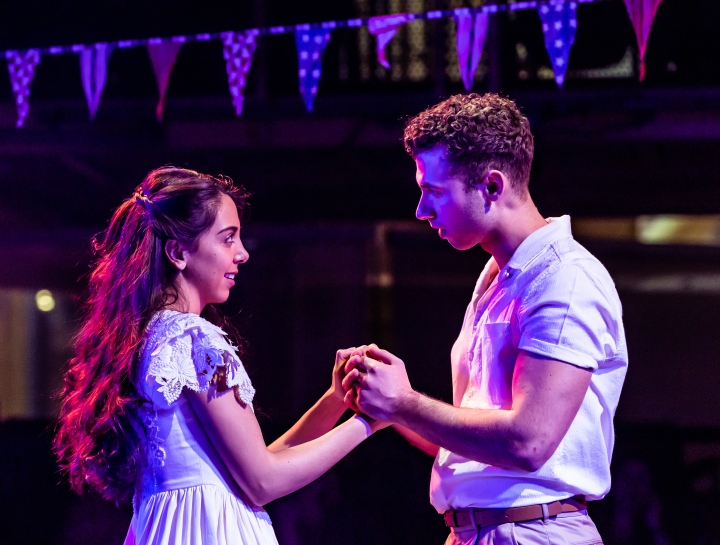 Sarah Frankcom’s revival of Jerome Robbins’ popular musical has undoubtedly captured the attention of Manchester audiences, with the show’s entire run selling out before opening night. However, the production has also secured a unique place in the West Side Story ‘hall of fame’ by being the first major professional staging to reimagine Robbins’ iconic choreography.

Inspired by Romeo and Juliet, and set in 1950s Manhattan, it’s the story of Tony and Maria, two lovers caught up in the rivalry between their local street gangs – the Sharks and the Jets. Frankcom’s production feels fresh, and pulses with a youthful energy. This is especially true of Aletta Collins’ wonderful new choreography. Restless and fluid, her company of dancers flamboyantly leap into the air but also subtly stroke the floor with the soles of their feet. They circle each other or rotate in formation, echoing the in-the-round staging. Less balletic than Robbins’ original choreography, the dancers’ movements seem freer, more natural and expressive.

The famous clicks are still there, they just crop up in unexpected places. In one standout sequence, Collins manages to convey the sense of Tony and Maria being drawn together across a crowded room, by slowing and seamlessly clearing her busy throng of dancers from the stage to leave the two lovers momentarily alone. There’s something dream-like about it, with the variations in the sound and speed of the company’s collective clicking heightening the intensity of their gradual withdrawal and all-too-sudden reappearance.

There’s a similarly liberating approach to the staging of Bernstein and Sondheim’s well-loved songs, with some being radically reframed. In the show’s most arresting moment, Frankcom firmly positions ‘Somewhere‘ as a song about something much more than the dreams of a love-struck girl and boy, turning it into a galvanising anthem of hope for misfits, underdogs, the lost and the despised everywhere.

In another innovative move, gang leader Barnardo is excised from ‘America‘ – enabling the joyous and playful back-and-forth song, about the comparative advantages of life in Puerto Rico and the United States, to become a conversation purely between the female members of the Sharks.

This is a West Side Story that, from the opening scene onwards, creates more space for women to be seen and heard. They are active as gang members, more present than historic versions of the play allowed – they assert themselves as characters in their own right, pushing at the limits of the roles that men chose to assign them.

Jocasta Almgill shines as Anita, full of passion and energy. However the show’s trump cards are undoubtedly Andy Coxon and Gabriela Garcia as Tony and Maria. Garcia’s Maria is infectiously high on the possibilities offered by love and her new home in America, while Coxon’s Tony is all warmth and charm as his perspective on life shifts and widens. Both sing with a conviction and clarity that draws you in to hang on every word, and their scenes together are transfixing. None more so than the touching intimacy of ‘One Hand, One Heart‘ where they kneel on a piece of fabric unfurled across a bridal shop floor, imagining their wedding ceremony, with the light closing in around them.

Designer Anna Fleischle’s white metal and perspex structures create a striking second level for the action – conveying a sense of height that reflects the play’s Upper West Side setting. Your view on the success of the set design will however be shaped by where you are sitting. Those closest to the series of steps, ladders and platforms may find their occasional tendency to wobble distracting, and the obstruction of sight lines frustrating.

There’s no doubting the quality of Frankcom’s production, and you can only marvel at the multiple layers of artistry on display. For many that will be more than enough, and there’s nothing wrong with that. However, despite everyone’s best efforts, the production can’t disguise how of its time West Side Story is, and how dated it can feel. While the play’s themes of territorialism, prejudice and hatred will still be familiar to a contemporary audience, this world of roughhousing and rumbles struggles to tell us anything original or useful about where we are now.

Despite the production’s many visual and aural pleasures, something about it left me cold. As a new generation of young people face the consequences of another wave of knife crime, this slick revival of a song and dance show about 1950s gangs, with highly stylised depictions of violence and death, feels uncomfortably irrelevant.

Images by Richard Davenport: The Other Richard 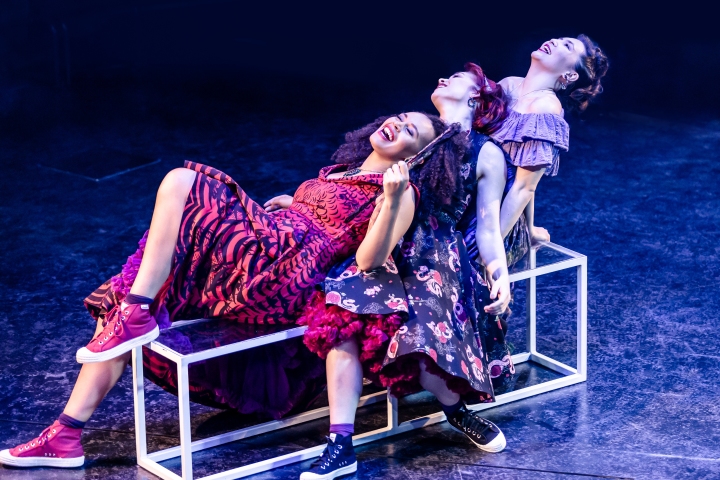