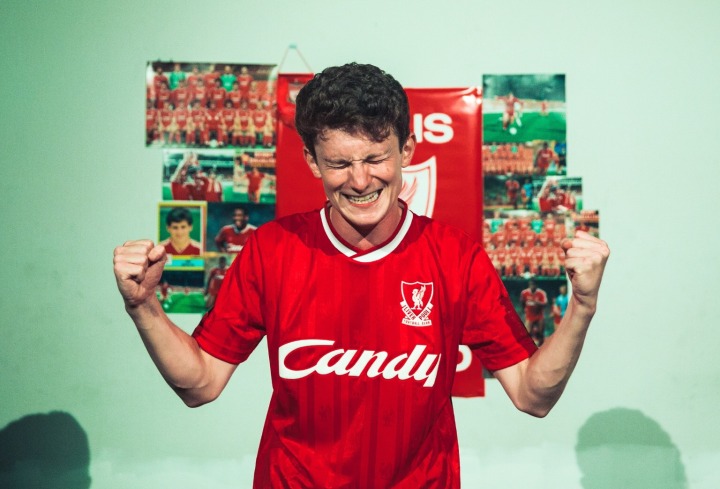 Greg is a football mad fourteen years old. “Red through and through”, his bedroom wall is covered with Liverpool memorabilia. It’s 1989, and Kenny Dalglish jostles for space on that wall with footballers John Barnes and Jim Beglin. When Greg’s not thinking about his beloved team, he’s moaning about his dad or messing around with his best mate Tom.

Luke Barnes’ script perfectly captures the hormone-fuelled ups and downs of teenage life. Everything is a mini drama, not least the simmering dispute between Greg and the (to him) terrifying Sarah Jane, over whether his cock tastes of Marmite or her fanny smells of Quavers. Life is still a game, and nonsensical rumours, such as the exploits of a sex mad mob of grannies tempting Everton players with their freshly baked tea cakes, are gleefully recounted rather than critically dismissed.

Like a lot of young men, Greg’s head is filled with the easy thrills of action movies – he imagines himself as Die Hard’s John McClean laying waste to some enemy or other, or escaping the clutches of drug-addled zombies in the local woods. In those moments, he feels invincible.

A birthday gift, two tickets for him and Tom to see Liverpool play in Sheffield, will change his life forever. Armed with the knowledge of the implications of the date and that destination, it’s painful to watch Greg’s mounting excitement as that fateful Saturday gets ever closer. His enthusiastic determination to overcome a series of obstacles standing between him and his day at the match is infectious, but you find yourself hoping he won’t succeed.

The power of Barnes’ play, and the performance at its heart, is that it forces the audience to confront the horror that eventually unfolds through the uncomprehending eyes of someone who, for all their bravado and cheeky charm, is still a child.

Daniel Cassidy skilfully brings Greg and a whole cast of other characters to life, switching voices with deceptive ease. Despite Greg’s incessant banter, he’s not all mouth. Cassidy offers up a strikingly physical performance, animating the space with a restless youthful energy. Leaping up in the air as if shimmying down a drain pipe, high tailing it from the One Stop Shop with a pile of stolen papers or collapsing carelessly into a heap on the floor. He’s all jutting elbows and flailing limbs – gangly, gauche and wide-eyed. So when he stops, stunned, in his tracks, or is forced to fold in upon himself under a crushing weight it is an arresting and affecting sight.

That visual story-telling is matched by real emotional depth. Sensitively directed by Chantell Walker, there’s nothing mawkish about it. Lean, focused and increasingly tense, the production is determined to do justice to the events being depicted. Daniel Cassidy’s powerful solo performance journeys from loveable foolishness and youthful vulnerability, towards somewhere raw and painful, to a place where “nothing seems the same anymore”.

Bottleneck will be at The Edge Theatre on 15 March, and then Royal Court Liverpool on 27 & 28 March.