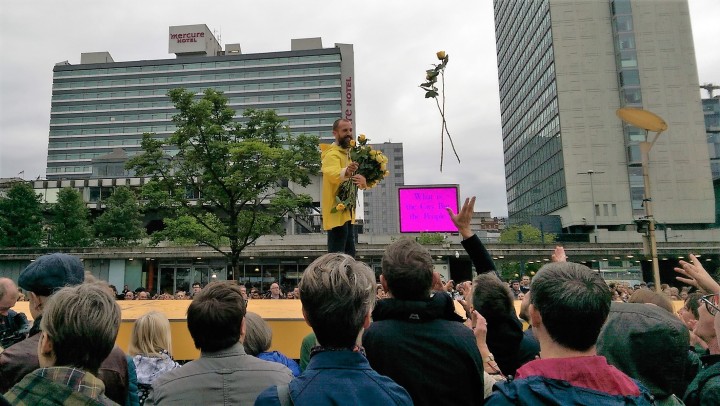 This year I’ve been lucky enough to see lots of great theatre in Manchester as well as in Birmingham, Leeds, Liverpool, London, Sheffield and York. The following are my favourite Manchester shows of 2017. I’ve restricted my choices to productions that were either premiered in the city or could only be seen here. What I’ve not included are shows that were passing through on tour or that were revivals from elsewhere. It may appear contrary but when I sat down to think about everything I’d seen, those parameters allowed me to compile a list that made sense to me as my Manchester favourites of 2017.

So in no particular order, here are my top ten shows… 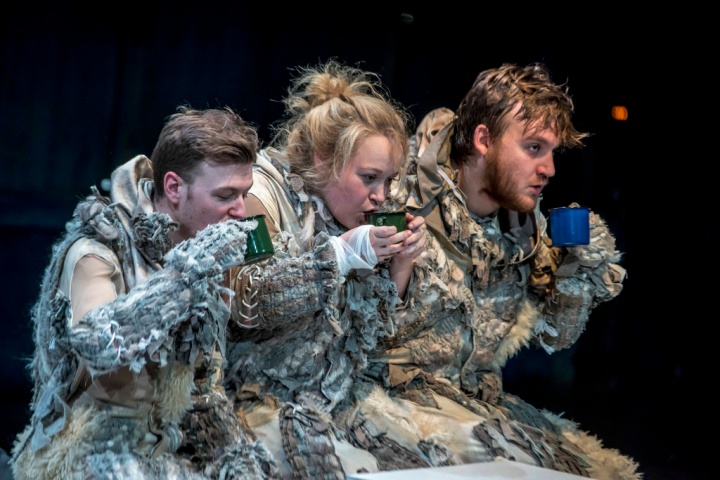 Powder Keg have been busy this year touring with their noisy, angry, agitated (and very funny) debut show ‘Morale Is High (Since We Gave Up Hope)‘. Back in June, Manchester was treated to a run of a new show ‘Bears’. It was a huge progression and an altogether different beast. A response to climate change, it wordlessly evoked a wintry wasteland populated by creatures complicit in the destruction of their habitat. Silly one moment and then despairing the next, and all wrapped up in an otherworldly sound and stage design. Daring and thoughtful, it will be interesting to see where Powder Keg go next. Here’s my original review.

Since becoming the Royal Exchange’s Artistic Director, Sarah Frankcom has asked the audience to go on quite a journey with programming that’s been increasingly willing to experiment and take risks. Jeff James’ ‘Persuasion‘ was the show that signalled 2017 was going to be the year when things stepped up a gear. Everyone, understandably, got very excited about Jane Austen’s characters enjoying a foam party, but there was so much more to James’ sleek updating of her last novel than all those slippery bubbles. Alex Lowde’s cool, modern and consciously fashionable design was a strangely perfect fit for the Regency society types. Inspired by Austen’s work rather than cowed by it, James’ confident adaptation was consistently good-humoured and surprisingly true in spirit to its original source. It was a total pleasure. Here’s my original review.

What Is The City But The People? (Piccadilly Gardens, June 2017)

The idea of ordinary Mancunians being celebrated on a super-sized catwalk, a democratisation of a symbol more often associated with glamour and exclusivity, was originally Jeremy Deller’s. However Manchester-based theatre and performance makers Quarantine deserved the credit for turning the idea in to a genuinely memorable opening event for 2017’s Manchester International Festival. Director Richard Gregory delivered something that felt very true to the city and told real life stories with innovation and integrity. With its huge cast of real life Mancunians, it was rehearsed just enough to pull it off but not so much as to feel forced or lacking in spontaneity. This was a living, breathing city – the mundane and the extraordinary. Here are my original thoughts.

After such an inspiring opening event, this year’s Manchester International Festival then proceeded to seriously disappoint. For a festival that promises the extraordinary, it was a decidedly pedestrian year.

The festival did however include the wonderful ‘Returning to Reims‘. Thomas Ostermeier’s adaptation of Didier Eribon’s memoir, was a timely and thoughtful piece of work. Warmly lit and meditative, it asked its audience to listen carefully and concentrate. Filtering ideas through layers of film, dialogue and voiceover it was a very still, centred production. A calm but focused response to troubled times. The quietly authoritative performance from Nina Hoss gave it personality and held it all together.

It should be no surprise that it’s the strength of the performances that always stands out at 53two. This small (actor-run) space has established itself as a friendly hub for Manchester’s acting community.

Their production of Anna Jordan’s ‘Freak‘ was a fiercely forensic examination of the pressures women face and the price they pay. While there were no male characters on stage their presence was felt throughout – their expectations of women, their subtle manipulations, their pack mentality, their commodification of the female body and their economic power. Although it pre-dated the Weinstein revelations and the #MeToo movement it had much to say that was relevant to what followed. As 15-year-old Leah struggling with her first serious relationship Stacey Harcourt was touching and charming. Alongside her, Alexandra Maxwell was unforgettable as Georgie, a woman subjected to a horrific sexual assault. Maxwell’s powerfully contained performance packed with painful understanding, sought neither pity nor sympathy – it was at times unbearable to watch. 53two’s production and its two incredible performances did full justice to a powerful piece of writing that combined a rawness and willingness to dig deep with hope and humanity. Here are my original thoughts about the show.

Joseph Houston and William Whelton deserve much credit for creating from scratch a thriving intimate theatre space in Ancoats. Although they host a variety of different productions, it’s their partnership with Aria Entertainment that has attracted the most attention. That relationship has resulted in a growing national reputation as a hotbed of new musical theatre. Although the recent family-friendly frills and froth of Little Women The Musical was deservedly popular, my favourite show there this year was the much darker ‘Pippin‘.

A sort of play within a play, acted out by a wandering troupe of performers, this revival of Stephen Schwartz’s 1970s musical was a deceptively light looking confection that concealed several tougher layers. Director Jonathan O’Boyle’s carefully crafted, stripped back production was full of eye-catching detail. Packed with big songs, slick Fosse-esque dance routines and immaculate performances (especially from Genevieve Nicole, Jonathan Carlton, Mairi Barclay and Tessa Kadler) there was much to enjoy. Designer Maeve Black’s run down Vaudevillian music hall stage within the former mill building was a perfect setting and the show artfully razzle dazzled you all the way to its thought-provoking finale. Here’s my original review.

Performer, director, writer, poet and singer Cheryl Martin is an unassuming but influential Manchester powerhouse. Her most recent show ‘Who Wants To Live Forever?‘ is, like her previous one ‘Alaska‘, a very personal affair. Free-flowing and loose in form, it’s a beautiful show that keeps drawing you back. Martin reminisces about family and friends while also contemplating time and space. Ambitiously fusing art and science, the show searches for answers within the endless depths of the universe while reflecting on key moments in Martin’s life. Simply staged, with clusters of glitter balls to catch the light in the darkness, we could be floating in a celestial sky or sharing a moment in a smoke-filled dimly lit nightclub. As you’d expect from a wordsmith, it’s written with precision and care. It also draws on the voices of the singers who have soundtracked Martin’s life (including Billie Holiday) as well as scattering literary references to light the way. “Golden lads and girls all must, As chimney-sweepers, come to dust“. Anchored by Martin’s generous and intensely emotional performance, ‘Who Wants To Live Forever?‘ is an expansive, haunting and multi-layered show where fate and loss rub shoulders with hope and dreams.

Charlotte Maxwell interviewed Cheryl Martin about the show for A Younger Theatre.

Derek Jarman’s 1978 film was reimagined 40 years on by director Chris Goode for both the stage and a new generation. A riotous ride of monologues, music, dance and bits of storyline. The film’s original queer politics were brought bang up to date and the diverse cast added new perspectives to the mix. Goode and the company succeeded in creating something defiantly celebratory – a joyous ‘fuck you’. It felt so relevant, so of its time that it was easy to forget it was a performance. The space felt occupied by the cast. What stood out was its angry despair. The belief that nothing seems to work, that the only answer might well be the apocalypse. Swirling, intricate and mercurial, Chris Goode’s ‘Jubilee‘ was a bleak beauty. Here’s my review of the show.

As the year drew to a close, HOME’s Artistic Director Walter Meierjohann offered up a finely judged production of Chekhov’s ‘Uncle Vanya‘. Steffi Wurster’s set design (all damp patches, peeling wallpaper and mismatched furniture) combined seamlessly with lighting, sound and music to create something genuinely evocative.  The acting was revelatory, engaging us intimately with characters’ thoughts and feelings. Nick Holder’s Vanya and Hara Yannas’s Yelena were especially compelling. It was a startling ‘Uncle Vanya’, full of life and richly atmospheric. Meierjohann’s direction was inspired and meticulous and this was undoubtedly his finest work to date at HOME. Here’s my original review.

Autumn brought an unexpected pleasure to the city when Sleepwalk Collective collaborated with Theatre and Performance students at the Arden School of Theatre on a new production. The resulting show ‘Khloé Kardashian’ was not easy to define or describe but it was beautifully unsettling, chilly and hypnotic. An eerie mash-up of Chekhov’s ‘Three Sisters’ with musings on those modern-day celebrity siblings, the Kardashians. Yet it was also about reality and illusion, the authenticity of the theatrical experience and our role as an audience. And with a nod to Chekhov it also asked us to reflect on the passing of time.

Unconventional, experimental and wholly satisfying it was blessed with incredibly rich sound design and atmospheric lighting. The performances were uniformly excellent and the direction and design elevated it to another unearthly dimension. Lynchian in its ability to create something of this world and yet not, its words and visual compositions still linger. Here’s my full review.

Some people, places and things that also left an impression.

The following are a few other things that I really enjoyed in Manchester this year.