Review of A Christmas Carol at Bolton Octagon.

Kate Ferguson and Susannah Pearse, the writing team behind Bolton Octagon’s new musical adaptation of A Christmas Carol, have already been confirmed as the creators of the theatre’s 2023 festive offering (Around the World in Eighty Days).

Quite a vote of confidence, considering that their latest show has only just opened – but it’s not hard to see why the Octagon would want more of what the writing team can offer.

At a time of “Peak Ebenezer”, when you may have more chance of stumbling across a production of A Christmas Carol at a local theatre than finding eggs during your weekly shop, Ferguson and Pearse have crafted a satisfyingly distinctive take on the Dicken’s classic. The familiar story is there, but it is all fizzier than you might expect, and better for it.

As Scrooge, Laurie Jamieson (so good in the Octagon’s production of One Man, Two Guvnors earlier this year) is a curmudgeon, but he also dishes out plenty of dry humorous asides. On being confronted by an exuberant decoration-bedecked Ghost of Christmas Present joyfully showering snow everywhere, Jamieson’s Scrooge deadpans “I don’t think we’re going to get on to be honest”. Constantly peering over his pince-nez with a look of pure disdain, he is the show’s guilty pleasure.

Interestingly, the storyline foregrounds Scrooge’s family background more than is usual – to good effect. His relationship with his sister Fan is imaginatively (and at times movingly) woven into the ghostly visitations that transform his world view. It’s an approach that creates space for a Scrooge who is less loudly monstrous, and more a man misshapen by family tragedy and bad decisions.

Apart from Tiny Tim (played by Dominic Smith on the night I attended), all the many other roles are inhabited by the five-strong ensemble of Jonathan Charles, Grace Firth, Lianne Harvey, Lauren Patel and Robert Wade. Delivering some impressive work across their various characters, they also (along with musical director Matthew Malone) collectively play 47 different musical instruments.

Musically, the show seems less bothered about earworm potential, and more focused on creating atmosphere and in-the-moment impact. It’s an approach that works well, although occasionally vocals are drowned out in the mix by enthusiastic playing (presumably easily fixed).

In among their entertaining cornucopia of musical styles (did I hear a tango rhythm in there somewhere?), Ferguson and Pearse are also capable of a touch of the dramatic – listen out for one hell of a sustained pause before the refrain of “Maybe One Year He’ll Surprise Us”.

Aptly, for a festive show, the music is most successful when it’s getting the party started – which in this case is not once but twice. As Mrs Fezziwig, Grace Firth manages to get most of the audience on their feet to join in with some spinning around, shouting out, and “fezziwiggling” to the left and right.

Later, Lianne Harvey (a glorious Ghost of Christmas Present) delivers a crowd-pleasing disco-powered celebration of the joys of Christmas pudding. Mic in hand, she strides diva-like across the stage, dressed from head to toe as a Christmas tree, and flanked by her fellow cast members sporting over-sized pudding headwear. At this point, you’re probably getting a sense of the production’s Dickensian vibe…

Those outfits are just a few of the many delights to be found amongst Katie Scott’s designs. There is minimal set – with plain wooden furniture wheeled on and off as needed. By contrast, characters’ costumes are rich with texture – wool, velvet, and taffeta – warmed by splashes of bright colour.

With the arrival of the ghosts, Scott’s imagination runs riot. Look out for giant baubles, sparkly chains, upside down trees, and a bicycle that shoots out flurries of snow. Mrs Fezziwig’s party outfit includes a bauble-like puffball skirt; while, with her illuminated shoulder pads and sparkly headpiece, the Ghost of Christmas Past is reminiscent of a fairy from the top of the tree.

It’s fair to say, that this isn’t for those who like their seasonal ghost stories full-on, but it’s not without a few scary moments. In particular, the Ghost of Christmas Future, benefiting from some great lighting design, appears to have escaped from a Guillermo del Toro horror film.

Talking of movies – in a recent interview, director Georgia Murphy joked that, “there is no way I can compete with The Muppets’ version but I’m going to give it a good try”.

Personally, I don’t think that’s a bad benchmark to set, but let’s not waste time wondering if Kermit would be green(er) with envy or not after seeing Murphy’s fast-paced and entertaining production.

As if by magic, Ferguson and Pearse’s adaptation somehow manages to strengthen the humanity at the heart of Dickens’ tale, while distilling it down to allow space for quite a bit of enjoyable artistic licence – and Laurie Jamieson’s wonderfully unique Scrooge fits into their whole approach perfectly.

Fresh, lively and funny – in a crowded field, Bolton Octagon’s A Christmas Carol admirably forges its own path. 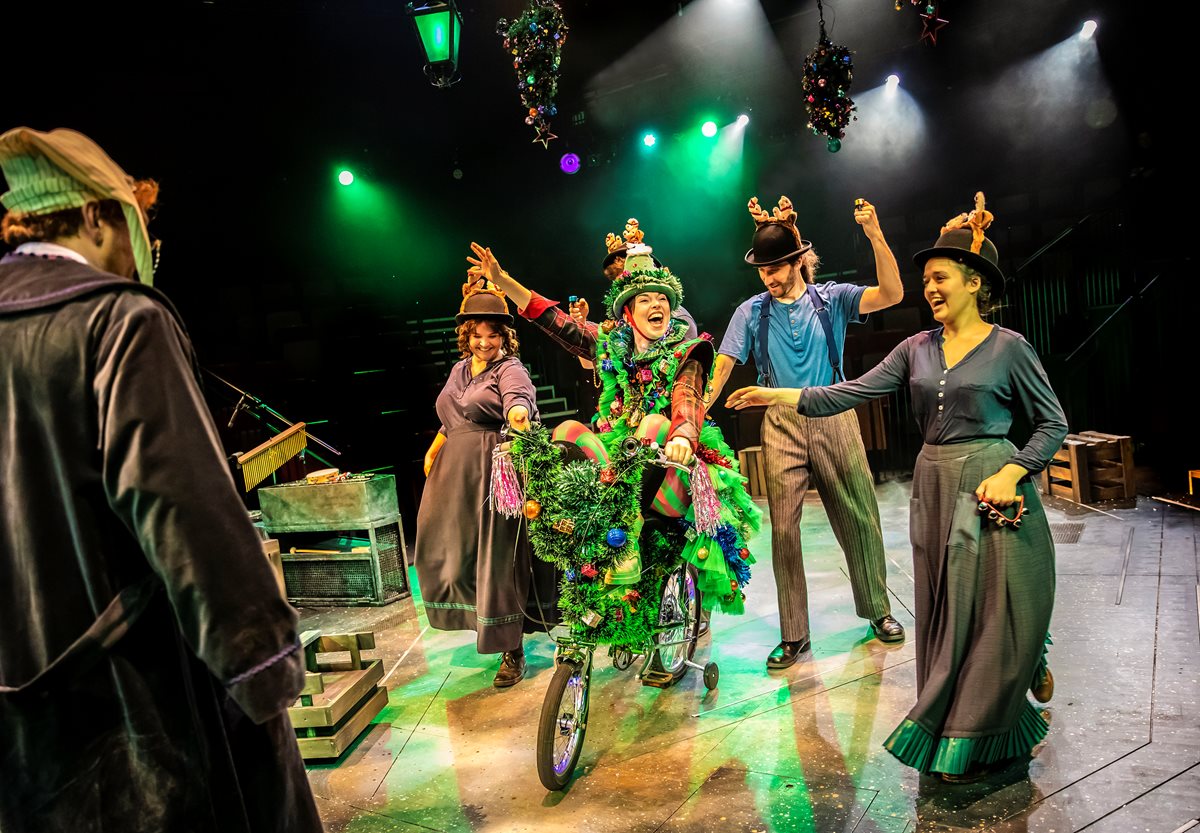