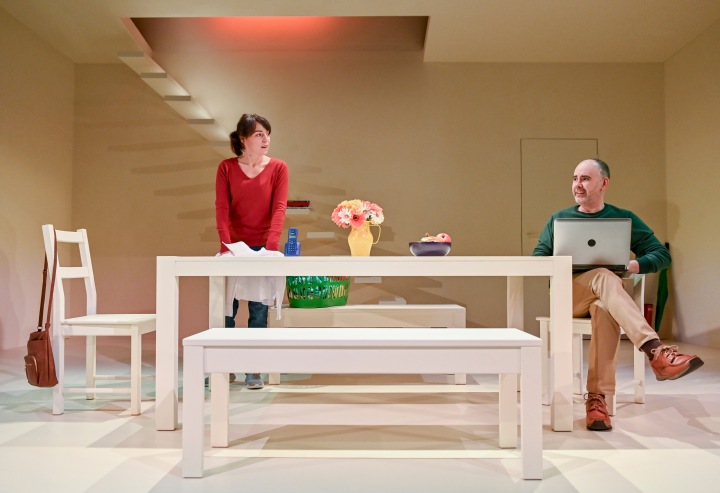 When a video of seventeen-year-old Jack having sex with his girlfriend appears online, his parents struggle to cope with the implications. His exams are looming, and the bright future they’d mapped out for him seems in peril. As Di and David try to protect their son from the fallout, and make sense of what has happened, certainties suddenly seem in short supply.

James Fritz’s work often plays around with form and Four Minutes Twelve Seconds is no exception. Relocated to Oldham for this regional premiere, his modern-day morality tale twists and turns like a thriller, with revealing details being drip-fed to both the audience and the characters. We never meet Jack, our knowledge of him is filtered through the perceptions of the parents, his friend Nick and former girlfriend Cara. Two questions hover in the air. What is actually happening in the video, and how did it end up online?

The potentially devastating impact of lives being played out via the internet is laid bare. Di rages at the fact that someone’s impulse to share has resulted in “half a million people tossing themselves off (watching) two kids having sex“. However, this is about so much more than privacy and the perils of the internet. Like the dark silver panels that enclose the Coliseum’s stage, reflecting the audience’s faces back at them, the play (and the web) hold up a mirror to society more generally.

What might have previously gone on behind closed doors, with no witnesses, is now permanently recorded for all to see, along with other digital traces of people’s thoughts and intentions. That video of what went on between Jack and his girlfriend, just like emails he sent, and photographs messaged to friends, tell a story. As Di pieces these ‘clues’ together in search of answers, Fritz’s script examines the issue of consent, and the disconnect between what women know to be true, and the things some men choose to believe.

The play explicitly recognises that consent, like justice, doesn’t take place in a vacuum. Who is most likely to be believed, and when it comes down to it, who gets to own and control the narrative? When Cara demands of Di “Looking like I do, talking like I do, who’s going to believe me?“, she recognises the inherent power of those she is up against – finding herself at a disadvantage not just because of her gender but also her class and social background. Powerfully, the production’s casting decisions, intentionally or not, allude to a further unspoken layer of privilege, whiteness.

Designer Anna Reid creates a striking Instagram-worthy home for Di and David – clean lines, cream walls, white floor, and all brightly lit. A few colourful markers of domestic life catch the eye within the almost clinical surroundings – a vase of cheerful flowers on the table, red wellies and a green umbrella by the back door. As revelations spill out, those warm flashes of colour vanish, the light gets dimmer and shadows gather.

Stewart Bartles’ stunning lighting design transforms the space to startling effect, one moment unexpectedly illuminating the audience, the next bathing characters in a blue fluorescent glow. Scenes get progressively shorter, eventually edited down to a sharp succession of jump-cuts, and the flickering darkness and reverb-infused music that punctuates them heightens the growing sense of tension.

The four protagonists are intriguingly multi-dimensional and a strong cast skillfully brings them to life. As Di, Jo Mousley offers a powerfully controlled but affecting performance as the increasingly conflicted and disillusioned Di, while Lee Toomes as her husband David reveals unexpected layers. Alyce Liburd subtly conveys the vulnerability and hurt beneath Cara’s tough angry exterior, and as Jack’s seemingly happy-go-lucky friend Nick, Noah Olaoye is thoughtful and tender.

There’s an embarrassment of riches here, with insightful performances, beautiful design and Fritz’s thought-provoking script, which directors Natasha Harrison and Chris Lawson artfully condense down into something lean, cohesive and tightly focused. It’s a riveting production, arrestingly staged, that grips right to the very end.