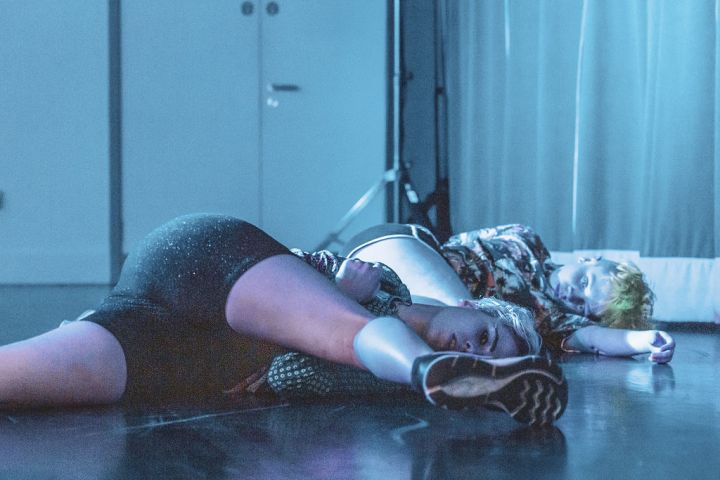 “Only when I’m dancing can I feel this free“, someone once said, and for those whose recorded voices emerge from Sound Cistem‘s speakers that certainly feels true. They talk excitedly of hitting their stride on the dance floor, feeling warmed up, freed up and flowing.

Such sweet sensations are hard-won and too often fleeting for the young trans and non-binary people who were interviewed by Plaster Cast Theatre. Their experiences of being in public spaces, and more specifically nightclubs, are the focus of this piece of dance-fuelled verbatim theatre.

Performers Lizzie Morris and Ayden Brouwers enter in slow-motion from opposite sides of the stage. All the better to examine every detail of their movements, as they dance towards each other. ‘How do we look?‘, they ask the audience. And ‘how do you look?‘. Any ambiguity, and it’s there in those questions, is quickly dispensed with. We are invited to look, to watch, to observe – our eyes on the two of them, as the show explores the impacts of the cis gaze on trans bodies.

Words never pass Morris or Brouwers’ lips. Their few utterances, the occasional instruction or question, are embedded within Sebastian Schmidt and Lucy Basset’s carefully crafted soundscape, along with the thoughts and feelings of the people whose experiences shape the show. All the while, the music plays on, and the two of them keep dancing.

At times it can be overwhelming – the voices, movement, tunes, bright lights and projected words coming at you all at once. Reminiscent perhaps, in a small way, of the constant demands placed on trans and non-binary young people – the pressure to conform to the expectations of others, the feeling of needing to ‘perform’, and the cumulative effect of crass and abusive comments.

Dance feels well-suited to the subject matter. As a form it can be gendered, and so too can elements of gender be performative. Posture, movement and confidence all play a role in how people present themselves, and interviewees talk of squaring their shoulders, spreading their legs wide or swaying their hips.

Morris and Brouwers don’t just move to the music, they insinuate themselves into the intonations of the interviewees’ voices, make flesh the spoken experience of others, and physically express those underlying emotions. Memories of so many nights out, and occasionally a glimpse of their own personal stories. On and on they keep going, deftly shifting the narrative in a drum beat. It’s mesmerizing.

Exhaustion eventually sets in, and the two dancers start to falter. Settling into an extended holding pattern, they desperately repeat the same sequence of steps as people talk of feeling trapped and worn down by trying to meet unrealistic standards or unfair expectations. Their recorded voices ask “These are our bodies, What do you see?“, and Morris and Brouwers lie there on the floor, breathless, exhausted and vulnerable.

Powered as it is by high energy and enthusiasm Sound Cistem feels celebratory and even euphoric, but as well as giving you joy, the stories it tells can break your heart. In inviting our gaze, Plaster Cast Theatre, are seeking to establish a connection, explicitly encouraging audience members to look, but also to listen, learn and push for change. According to the captions, the synths that flood in at one point are [hopeful], and ultimately so is the show.

Near the end, Lizzie and Ayden point as if spotting one another across a crowded dance floor. They gesture back and forth in mutual recognition. “I see you“, they seem to be saying and, held in Sound Cistem‘s ecstatic open embrace, we see each other too. 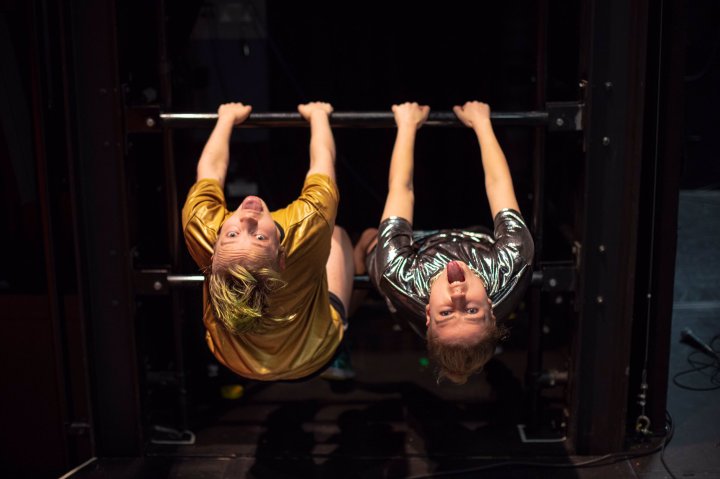