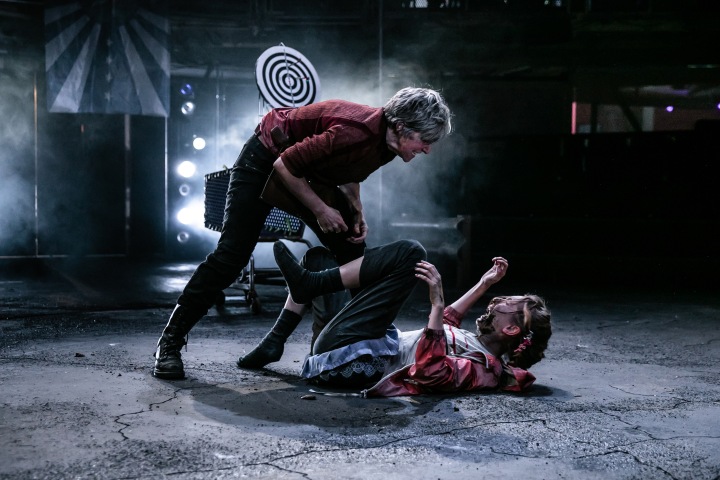 It’s 2080. Europe is no longer a collection of nations, it has become The Grid. The Reds and the Blues are at war, fighting for possession of each individual grid square of land. Self-styled “entrepreneur” Mother Courage follows the conflict in search of profit. Her daughter and two sons accompany her, along with her ‘fourth child’ – a customised Mrs Whippy ice cream van, from which she sells her wares. MC, as Mother Courage is known to her acquaintances, is sharp-witted, steely and unapologetic. “If you’re looking for shame you’ll find it in the dictionary between shag and shite“.

Although Anna Jordan’s adaptation sticks closely to Brecht’s original narrative, the new guise she has fashioned for it, is both surprising and illuminating. It’s a sprightly, simmering and gloriously foul-mouthed affair, adding fuel to the play’s anti-war message while introducing fresh perspectives for a 21st century audience.

With a grim appropriateness, Joanna Scotcher’s set seems more scavenged than designed – with reclaimed trolleys, cardboard signs and re-purposed vehicles. Clothing is functional and bright colours in short supply. MC’s van goes from souped up to stripped down, and then back again, as her fortunes ebb and flow.

Although violence and death largely occur out of sight, explosions and disturbingly loud shots reverberate within the auditorium. At one point a red laser light caresses the audience, in search of a target for some unseen weapon. These unsettling interventions add to an unremitting sense of lives lived under fire, a brutal and merciless existence.

Jordan’s women characters are especially aware of the risks they face. They constantly remind each other that a war zone is a treacherous place for women alone. Their sisterly camaraderie forged by the need to stay afloat, keep safe and retain a roof over their heads.

War is exposed as a “huge spluttering money-making machine”. Ordinary soldiers must face the consequences of jammed weapons, unsafe equipment and incompetent planning, while the people at the top get rich. Jordan’s MC scrambles around for a living at the messy end of the supply chain – flipping burgers, dealing drugs, pimping women and selling weapons. She’s warned that inevitably there’s a price to be paid for such profiteering, “if you want the war to work for you, you’ve got to feed it too”.

Amy Hodge’s assured production seems to struggle slightly with the Exchange’s in-the-round space. Vehicles occasionally block views for too long and the sound mix muffles words, especially during some of the singing. It’s especially strong however on visual detail. MC briefly sports a cheerful yellow dandelion in her hair, a gift from an admirer – cruelly unaware that she has just missed the last opportunity to see her adored son. A coat lovingly placed over a dead child by her mother, is retrieved only moments later – to be worn again by that desperately cold parent.

There’s a heartbreaking ordinariness to the relationship between MC and her children – exhibited in her affectionate chastisements, and in their embarrassment at her bold behaviour. Rose Ayling-Ellis’s Kattrin and Simeon Blake-Hall’s Swiss Cheese are possessed of a youthful naivety and gentle vulnerability, jarringly at odds with the world around them, The pitilessness of war is felt most keenly in the depiction of their fates.

Julie Hesmondhalgh’s central performance is easy to admire but tough to love. There’s a bit of Brechtian ‘distancing’ going on. She visibly slips out of character between scenes, or interacts with the production’s off stage musician to shout “hit it Nick“. “I’m no good with my emotions” proclaims MC, and Hesmondhalgh captures that quality perfectly. Though outwardly cold and calculating it’s evident, from what she says and does, that the survival of her children means everything to her. Yet when they perish she must numbly “stagger up and carry on“. There’s something horrifying in her repudiation of the norms of maternal grief and yet, within the dehumanising context of bloody conflict, it seems depressingly understandable.

Images by The Other Richard. 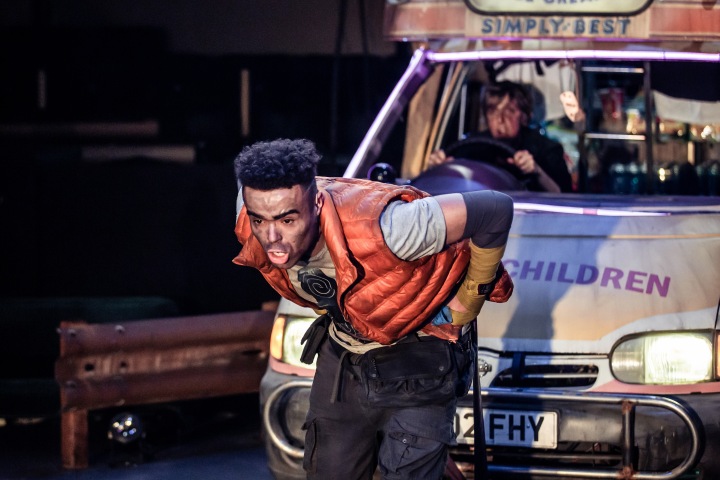