It’s odd how infrequently television is featured, or even mentioned in passing, in theatre productions, especially considering the big part it plays in so many of our lives. Are You Still Watching asks you to stare deep into its square eyes as it reflects on the immense influence of the small screen.

Opening with a variety-show style song and dance lamenting the loss of good old-fashioned entertainment, the 12 strong cast quickly discard their gold top hats and proceed to randomly flick through the channels of their collective imagination.

“Orange is the new black mirror, doctor who do you think you are…”

A series of scenarios and set pieces unspool, playing around with the trivia and trappings of telly-land. The cast adopt the personas of TV characters, some real (Paddy McGuinness and Jeremy Clarkson) and some imagined (Dr Who and Jon Snow). There are catchphrases, running jokes, snatches of theme tunes and one piece seems to echo the Strictly results show, as one by one the spotlights go out plunging each performer into darkness.

Dan Sanders is tall, slim and sports a too small curly grey hair-piece that perches comically on the top of his head, like a hat. He’s an unlikely Jeremy Clarkson. His Jeremy talks about Dan, while Dan simultaneously commentates on Jeremy – a sort of third person not so singular. We hear stuff we already knew about Jeremy but we learn things about Dan we didn’t. It’s a technique the show uses to good effect on several occasions. Performers are able to share thoughts about themselves, and make sense of their situation, using a safety net they have crafted from elements of a favourite tv show or celebrity. They are not just passive consumers of television, it provides material that they can positively appropriate for use within their own lives. So, Kellie Colbert isn’t just watching Alyssa Edwards (from RuPaul’s Drag Race), she is “learning”. While, she gloriously revels in the big blonde wig and the spangly black dress the show has gifted her, (and the chance to try Alyssa on for size), what she craves is not the costume but the confidence and sassiness of the person who wears them. She watches, not to become Alyssa, but an enhanced version of herself.

“You wanna be where everybody knows your name“.

The theme tune from Cheers pops up throughout the show, and its message of finding refuge in familiarity is one the show explores, as it relates to television. Someone walks us through the layout of their living room, it’s a bit of a shock to be reminded how intimate our relationship is with the ‘box’, how the screen occupies pride of place in so many living rooms. A sofa sits on stage for most of the show and, again and again, performers retreat to it, to be with friends and family on “the best seat in the house” – to drink tea, share memories, to relax and escape the pressures of daily life. One touching scene, tells of a mother and daughter bonding while watching a favourite show together, their easy chat about tv hiding the fact they struggle to talk about anything deeper.

There’s darkness too. It’s not all light entertainment, far from it. The sofa may be a place of safety, but it’s also a source of unexpected surprises, not all of them pleasant. Those tv characters clamber out from under the covers, a hand clutching a microphone appears and at one point a tangle of videotape nightmarishly spews out. There’s talk of the “other side of the coin”, a medium that exploits and manipulates. Onions are deployed as the cast weep cheap tears over contrived tales of cruelty to animals. Later (in a stand out moment), Jessamine Vowels sings a poignant but twisted ballad of love to “the light in the dark”, where she can “get lost and never come back”.

A sing-a-long to The Royle Family theme tune is a reminder of another show where characters spent a lot of time on the sofa talking about television. Just as that tv programme wasn’t really about television, Are You Still Watching is about so much more than the gogglebox. A heady mix of innovative stylings, humourous interventions, musical interludes and moments of pathos it deftly uses the warm glow of the small screen to illuminate thoughts on identity, celebrity, finding yourself and feeling safe.

“I long for fiction, dialogue, contrived plot-lines… a neat conclusion all wrapped up in a bow”.

Theatre and Performance at The Arden. 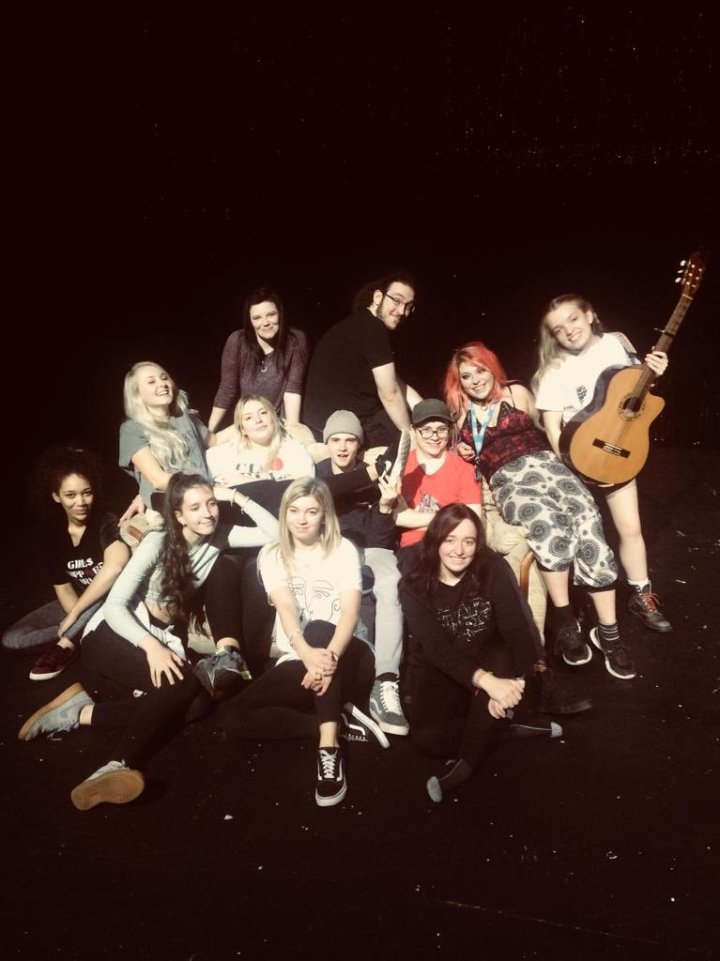