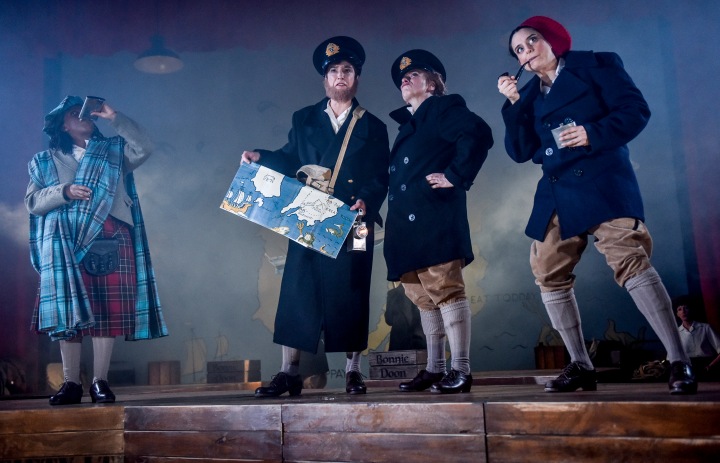 For the inhabitants of two Scottish islands weary of wartime shortages of their favourite tipple, the arrival of a ship laden with 50,000 bottle of whisky is a dream come true. Especially as that vessel has run aground and is slowly sinking beneath the waves. While the authorities dispose of the cargo into the sea by day, the islanders surreptitiously salvage as much as they can by boat at night.

Inspired by a true story, Compton Mackenzie’s 1947 novel Whisky Galore is familiar to many in the form of the hugely successful Ealing comedy film. Oldham Coliseum’s new production doesn’t stray too far from its origins. So, although gale force winds and hidden sandbanks seal the fate of the unfortunate ship, it’s no surprise that as an audience we find ourselves paddling in entertaining but safe theatrical shallows rather than diving to any dark unexplored depths.

Philip Goulding’s adaptation does add a potentially fascinating layer, with the story being told via a cast of seven women. Inspired by the real-life all-female Osiris Players who toured the country from the 1920s to the 1960s, the script follows the efforts of the Pallas Players to put on a production of Whisky Galore in a community hall.

Beyond some scene-setting at the beginning and occasional narration from their leader Flora Bellerby, the Pallas Players seem to vanish a bit too quickly into the background. There is though a running joke about things not running smoothly. A replacement has hastily had to be found for a cast member who has become pregnant while on tour. Cue prop mishandling, forgotten costume changes and general stage mismanagement.

A hand drawn map of the two islands acts as a backdrop to Patrick Connellan’s lean elegant design which fills the stage with four large wooden crates. These transform into seats, boats and the ship’s hold. The costumes provide an irreverent splash of colour with a busy mix of tartans, tweeds, the odd kilt and sporran and a couple of bin-lid sized tam o’shanters.

It’s no coincidence that the name of the stricken ship is SS Cabinet Minister. Retaining the original novel’s streak of anti-authoritarianism, the production cheers on the efforts of islanders to liberate the whisky while gently mocking the official attempts to stop them.

The whisky has seemingly miraculous properties. Its sudden abundance serves to break down barriers between the two islands and their respective Protestant and Catholic communities, as well as bringing families and lovers closer together.

You might expect that a production inspired by the work of the all-female touring companies of the post war years would have something to say about gender. Oddly, it doesn’t. Male characters talk casually of voices “shrill like the maiden’s organ” or ask dismissively “is the wife’s advice always in the man’s interest?”. Here, the fact that it is women saying these things is allowed to simply mollify the impact of the words rather than subvert the prejudices behind them. Surely a resourceful group of women from the generation that kept wartime Britain’s factories and transport networks functioning would have a bit more gumption than this? It’s difficult not to wonder what a female director would have made of it all.

There’s a tantalising taste of the possibilities the multiple layers and gender ambiguities could have offered. The troupe appear to have little respect for the character of Annag, a vampish flatterer of men. She is reduced to just a big blonde wig and a padded hour-glass shaped red gingham jacket. As if deemed unworthy of dedicated attention, four different cast members sling on her cartoonish ensemble at various times, portraying her dismissively with nothing more than a slack hand on the hip and a clichéd flick of the hair.

It’s mostly though a light and frothy affair. However, Goulding’s script and purpose both run out of steam before the end is in sight, and not even the spirited efforts of the actors (some of whom sang themselves hoarse on opening night) can hide that.

The hard-working cast of seven women are the show’s strongest element. Between them they play more than 20 characters and there is a sense of genuine commitment and affection for what they are doing. In particular, Alicia McKenzie, Isabel Ford, Christine Mackie and Sally Armstrong seem to have got the necessary blend of straight-faced jocularity just right.

Like the travelling troupes on which it is based, the show will set off from Oldham on a four-month tour to nine venues. It’s to be hoped that in that time the production can sharpen the script and make more of the pioneering women who inspired it. “Did the Lord put us on this earth for jollification?” says a dour character disapprovingly. Well, if pure jollification is what you like, the sterling efforts of this modern-day company of women will see you right with this cheerful, warm-hearted and easy-going take on a familiar comic tale. 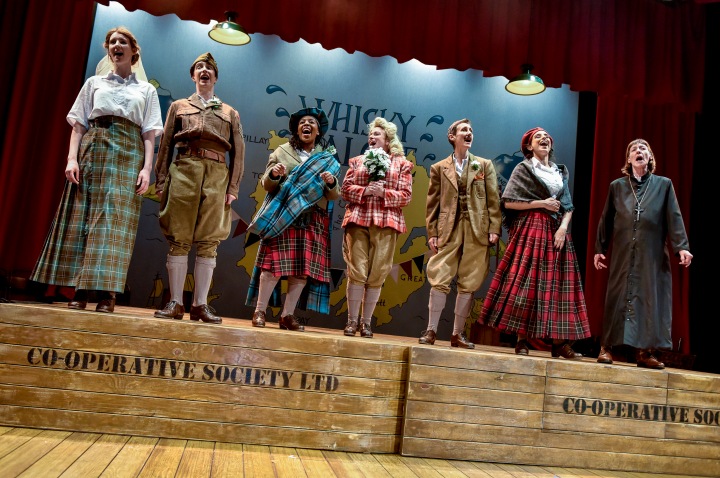