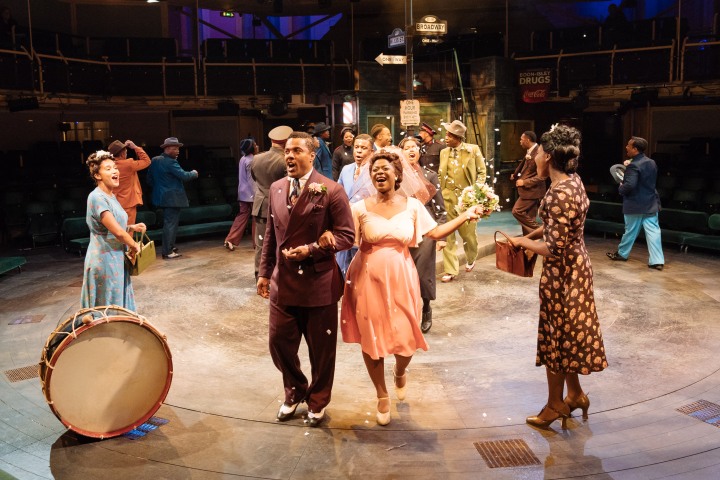 Runyonland can be a tricky place to bring to life. Too often characters with names like Harry The Horse, Big Jule and Rusty Charlie provide licence for caricature and broad brush strokes. Michael Buffong is having none of it, he gives us believable people, lives glimpsed on street corners. Flawed but likeable, his guys and dolls are down on their luck but dignified.

It’s very funny. The humour inherent in the stories and dialogue is all present and correct but the laughs have been sensitively dialled back a touch in places. Just how much is a contemporary audience expected to laugh at a man asking a woman out on a date for a bet or a fiancée made ill by a 14 year wait for a marriage licence? (Someone in the gallery can’t hold back from shouting “Don’t do it!” when Adelaide’s chance to get hitched finally came along). There’s a gentle sadness lurking within Lucy Vandi’s patient Miss Adelaide and it feels just right.

That’s not to say these ‘dolls’ are doormats. Abiona Omonua’s Sarah Brown and Melanie Marshall’s General Cartwright are determined and principled. And in a quiet revolution Danielle Kassaraté’s stylish streetwise Angie The Fox is a woman holding her own among the neighbourhood’s dice-shooting ‘guys’.

Ray Fearon is a favourite of Manchester audiences and his Nathan Detroit is laid-back and likeable. As Sky Masterson, Ashley Zhangazha is the production’s trump card – cocky, charming and yet wonderfully romantic. Beyond the main roles, there is a stand out moment from Trevor A Toussaint who delivers a tender heartfelt ‘More I Cannot Wish You’.

On press night a couple of the performers still appeared to be fine-tuning their vocals, although reassuringly just a few days later the musical numbers were already more punchy.

This ‘Guys and Dolls’ rolls a double six with its distinctive take on the music and movement. Embracing jazz and swing influences brings freshness and vitality to familiar songs and Kenrick Sandy’s smooth slick choreography is equal parts eye-catching and exciting. The two elements come together most thrillingly when the cast ebb and swell en masse as their gospel-powered performance testifies ‘Sit Down, You’re Rockin’ the Boat’ to heavenly new heights.

Luck has nothing to do with it, Buffong’s actors and musicians work their socks off in a classy, energetic and very winning production.

“A person can develop a cold…”

A special mention to Chelsey Emery who found herself unexpectedly stepping in to the role of Miss Adelaide a week in to the show’s run. To come on at short notice as an understudy on any night must be tough but on a packed Friday night she managed to make the transition to a lead role look effortless, bringing striking vocals and a genuine sweet charm to Adelaide.