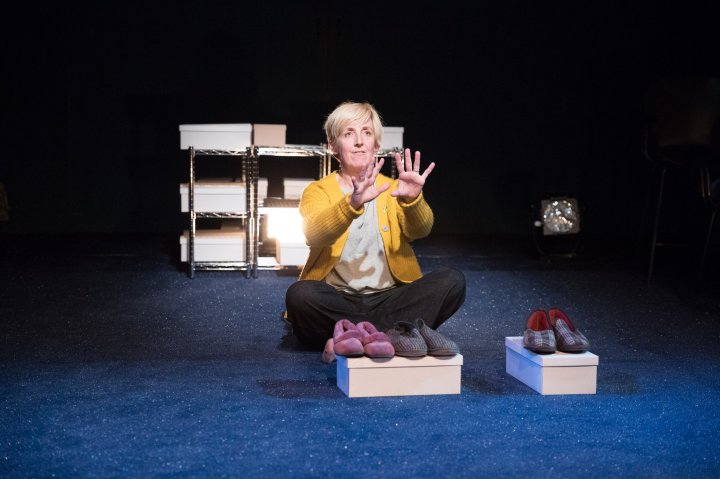 “Hello from the children of planet Earth”. Well, in this case, those that live on Preston Road…

Ian Kershaw’s new play, premiered at the Royal Exchange, is a very human piece of storytelling. Peopled with a neighbourhood’s worth of characters all brought to life by a solo performer.

It’s a simple set up. The audience is welcomed in to a plushly carpeted studio space. There are a couple of metal shelving units on either side stacked with plain white shoe boxes. That’s it, the rest is up to the performer and the script.

Staged in traverse, the space running through the studio becomes Preston Road. Shops, pubs, homes and people are all evoked. Lives begin to emerge. Most of this is sketched out through words but also shoes. Yes, shoes. Slippers, trainers, Doc Martins and brogues. Some pairs lifted with care and placed on their box, others tipped out in a pile and quite a few borrowed from the audience. It’s a device that works well. Pairs of shoes mapping out Preston Road and populating the stage as the actor builds each character from the ground up. Collecting in some of our footwear creates a more direct connection though – are we being asked to step into their shoes?

The narrative darts off in different directions but at its centre is Tom. A lonely man who rarely leaves the house. Tom looks out of his window at 28 Preston Road. He observes his neighbour Sara across the way, and she looks back at him with curiosity. Both have recently come out of failed relationships and feel their lives have ground to a halt. We also become acquainted with an elderly couple who live next door to Tom. They’re active in the local Neighbourhood Watch Facebook group. So far so earthbound, and yet…

Somewhere, up there, in the outer solar system, are the two Voyager space probes. Each carrying a golden record. These records contain sounds and images carefully chosen to portray the diversity of life here on Earth. Music, photos, drawings, sounds and ideas all waiting to be discovered by our extraterrestrial neighbours.

Switching back and forward across space and time, the tale of those golden records is mingled with the stories from Preston Road. Tom sees his life, thoughts, preferences and interests as being like those glittering discs – bundled up, floating around, unopened and undiscovered. There are other echoes across the galaxies. An inspirational message from space tattooed on an arm. A song chosen for inclusion on the record is played at a wedding.

The script is big on connections. Links, networks, symmetry, channels of communication – references to Facebook groups, morse code, semaphore and molecular structures. A sense that everything is somehow joined up, that we are part of something bigger.

There’s more to Raz Shaw’s direction and Naomi Kuyck-Cohen’s set design than first meets the eye. When the lighting dims, the comfortable blue carpet is revealed to have sparkling strands within it. It’s cosy domestic deep pile transformed into a night sky twinkling with thousands of stars. And those boxes don’t just contain shoes. The characters use them to store memories, messages, rolls of documents – just like those records in space.

Contrarily, just as the script frequently casts its eyes out to the limitless universe, it also has a tendency to curtail flights of fancy and abruptly bring things back down to earth. One minute the neurons in Tom’s brain are crackling together, the next it’s just a “penny dropping”. A teacher’s achievement is the talk of the staff room, well for a moment at least anyway. And while a mysterious machine roars dramatically in to action with a blinding flash of light it disappears with a “disappointing pop”. There’s a constant pull and push between ambitious leaps and small gestures.

In the world of Preston Road, there is room in life for fate, coincidences, dreams, fantasies and the unexplained. We’re asked to suspend our disbelief as clocks stop, people rise from their deathbeds, build mysterious machines in sheds and discover that their lives can be played out again in another dimension.

Kershaw’s writing is packed with detail – facts, figures, characterisations, insights and jokes. Occasionally it feels like too much information. How much do we really need to know about t-shirt designs for example? Also, I wasn’t sure why there was so much emphasis placed on Tom’s previous relationships with a series of Sarahs. Such quibbles though are swept aside by the script’s energy rush as it surges forward on its life-affirming trajectory.

Ultimately a play such as this, however well written, relies heavily on its storyteller. This one is gifted with a skilful dynamic performance from Julie Hesmondhalgh. Casually dressed, barefoot and greeting everyone on arrival, she’s our guide but also the entire cast of characters. She combines elements of improvisation and interaction with a steady stream of story-telling. Hesmondhalgh makes it all look effortless as she shifts gear, switches voice and keeps a tight hold on all the threads, references, themes and running jokes. It’s a hugely generous empathetic performance that makes us care about these people and ourselves.

At its heart Ian Kershaw’s play is the oldest story in the history of the world – a love story. Two lives intersect and then click together. But it’s also an invitation to ponder potential and possibilities, asking us to reflect on how we’d like our time on earth to be remembered, and reminding us to live life to the full.

The Greatest Play In The History Of The World… returns to the Royal Exchange from 20 to 29 September 2018.