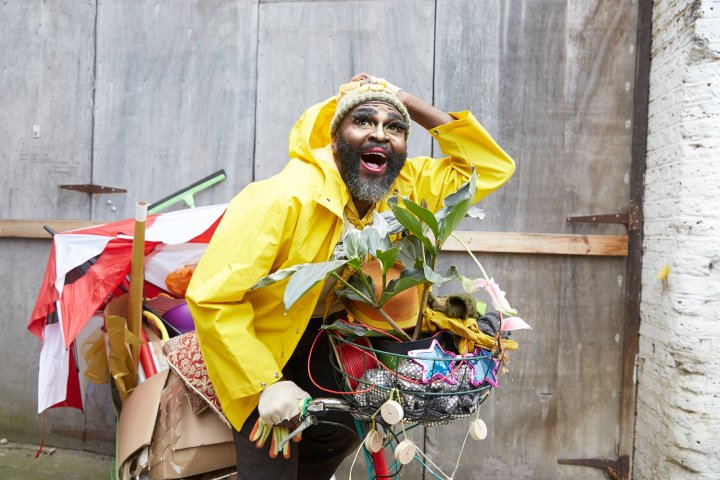 Once upon a time… cabaret artist Le Gateau Chocolat was inspired to make a show for “families, children and the young at heart”. Its name was ‘Duckie’.

It’s the story of a little duckling who can’t seem to be the duck his parents want him to be. He can’t even quack, although he’s great at burping. Struggling to be accepted by his family, Duckie sets off to look for friends at an animal circus.

With great charm, Le Gateau Chocolat single-handedly creates a circus filled with wonder. Although, he does get some help from a friendly storytelling voice which guides us through events, prompts him to become the various characters and even encourages the audience to join in now and then.

Duckie’s duckling features consist of two small clusters of yellow feathers as wings and a yellow cap for his beak. The various animals Duckie encounters at the circus are ingeniously evoked using bits and pieces ‘found’ in some boxes on stage. A tutu becomes a lion’s mane and a mouse is conjured up from a piece of rope. There’s the odd glimpse of glitz, Le Gateau Chocolat’s glittery red lipstick and a bright pink frilly umbrella, but mostly our imagination is fed with a clever use of simple everyday items.  This is magic grounded in real life

Duckie encounters repeated rejection from the circus animals he encounters – he’s not strong enough for them, or too fat or “not like” them. He’s even the wrong colour – the tightrope walking flamingos don’t want the pinkness of their act ruined by even a speck of Duckie’s yellow.

For a family show it doesn’t pull its punches – when Duckie is being called names, and at his lowest ebb, he crumples up distraught into a little ball and covers his ears. His sadness and vulnerability are evoked movingly in song (an excerpt from Taboo’s ‘Petrified’).

When a flamboyant fortune-telling peacock tells Duckie to be true to himself, things begin to look up. A mouse becomes his friend and when people hear Duckie sing they love his voice. He’s finally offered a job in the circus, as a singer.

The show’s musical score is bursting with Disney songs, show tunes and pop anthems – from ‘Pure Imagination’ through ‘Somewhere Out There’ to ‘I am What I Am’. Sometimes the lyrics are tinkered with slightly to suit the story but they are all powered by that rich deep emotion-filled voice.

There’s an elegant simplicity to the design and a sense of transience. It’s like being back stage at an old-fashioned travelling show with trunks of clothes, piles of crates and strings of light bulbs.

‘Duckie’ is a beautiful, thoughtful show. It has a magical lightness to it, as if it has blown in on a breeze. But beneath its fluffy yellow feathers it’s hiding a subversive truth. Salvation isn’t going to be found by turning into a beautiful swan – it comes from accepting yourself and realising it’s ok to be different.