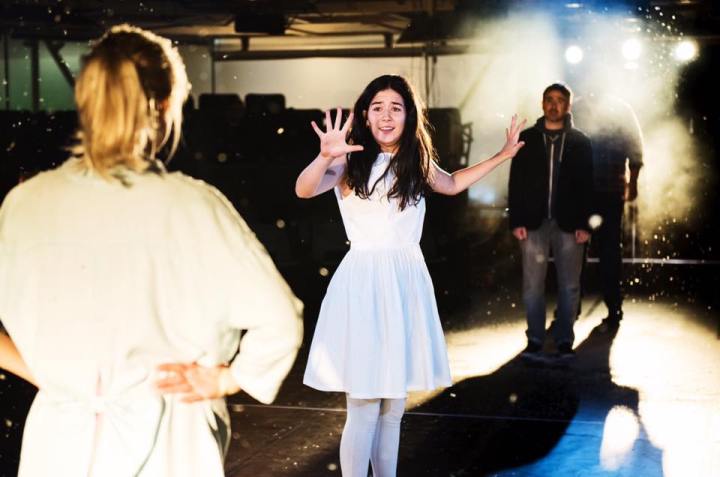 The Royal Exchange’s stage is crowded with people sitting around tables, chatting and waiting for something to start. Everyone is dressed as if they have just walked in off the street and it isn’t obvious who are the audience and who are the cast. The setting is so mundane and the furniture so utilitarian, it could be a local community centre. When Youssef Kerkour interrupts the chatter it wouldn’t seem out-of-place for him to start calling out the numbers for a night of bingo. Instead he welcomes us to Grover’s Corners, a New Hampshire town as the 20th century dawns.

True to playwright Thornton Wilder’s vision, we are asked to imagine the town largely without the assistance of scenery, costumes or props. Kerkour is the Stage Manager and he sweeps his hands wide to show us where Main Street would cut through the tables. He points out buildings and introduces us to local residents. He narrates but, as his name suggests, at his command lights dim or flare up, chairs are moved or actors are cut short and their stories refocused. If he wishes, events from the past or the future can be summoned up.  The audience is also involved, invited to introduce ourselves to our neighbours or remember our first romantic feelings. In this space we are acknowledged as a community although not as residents of Grover’s Corners.

A sense of that place is evoked through facts and figures – geology, coordinates, demography and buildings. “For those who think we have to have scenery” there are two ‘bags for life’ stuffed with fake flowers. Tellingly, all the detailed scene-setting feels superfluous once we are introduced to the local residents. Emerging from various tables they cross the stage to talk, interact and regroup as neighbours and also families. The milkman, the paperboy, the church organist, the gossip and many more. The residents of this town may tell us openly that they are too busy to bother with culture, but it’s the power of theatre that brings them to life. Two families, the Webbs and the Gibbs, are our orientation points within this busy town. In particular we follow the lives of George Gibbs and Emily Webb – two young people in love. What could be a creaky construct becomes natural and engaging.

Fly Davis’s design tightly manages our relationship with the space – no distractions, no fuss and the ornate hall outside the auditorium is totally screened off from view. It’s to be all eyes on the people and the stories they tell. The setting becomes less clinical as time proceeds, the bright light fades now and then and shadows appear. Occasionally there is a subtle burst of music but it all feels tightly rationed. When the production suddenly requires the appearance of something visually rich and detailed Davis pulls out all the stops and it feels like a feast after a fast – as the stage was transformed, someone behind me gasped.

Groupings of townsfolk are similarly deployed to good visual effect. At George and Emily’s wedding as everyone crowds in a tight circle around the young couple, it’s clearly an act of love and support but it looks as if they are also being confined and crushed. Mourners at a funeral rush on stage to the graveside and then moments later rush off – their lives rapidly slipping away as time speeds up before our eyes.

In a town populated with so many people, some lives are sketched more sparingly than others and characters can lean towards the formulaic. Patrick Elue and Norah Lopez Holden are however incredibly moving as the two young people in love. As the Stage Manager, Youssef Kerkour makes a tricky role seem effortless. As our friendly, folksy guide he’s all business one moment and then unobtrusively sharing a philosophical thought on life the next.

Sarah Frankcom carefully plays around with pace and intensity. The first half seems designed to lull us in to a complacency. Life goes on, routines shift, stories edge forward incrementally and time moves slowly. At one point we advance three years but the rhythms of small town life remain reassuringly stable. Things are kept light. When after the interval, Wilder’s timeframe leaps forward nine years, old certainties are slipping away. Everything shifts up a gear. In a gloomy darkness there is a sudden urgency and emotions run high.

‘Our Town‘ is ultimately not about a specific location, nor is it a simple celebration of small town life. Grover’s Corners is a reassuring place but not everyone is able to find happiness there and those who stay can find themselves compromised, their ambitions unfulfilled. The powerfully evoked final act offers a unique perspective on the world, acting as a clarion call against complacency and lamenting our inability to enjoy every moment of being alive.

Frankcom’s ‘Our Town‘ is a transformative experience. After finding yourself drawn in so fully to the hustle and bustle of this imaginary place, the cares and joys of the residents of Grover’s Corners fall away surprisingly quickly – and it’s your own life and the people closest to you that push forcefully to the front of your thoughts as you leave.

4 thoughts on “Our Town”