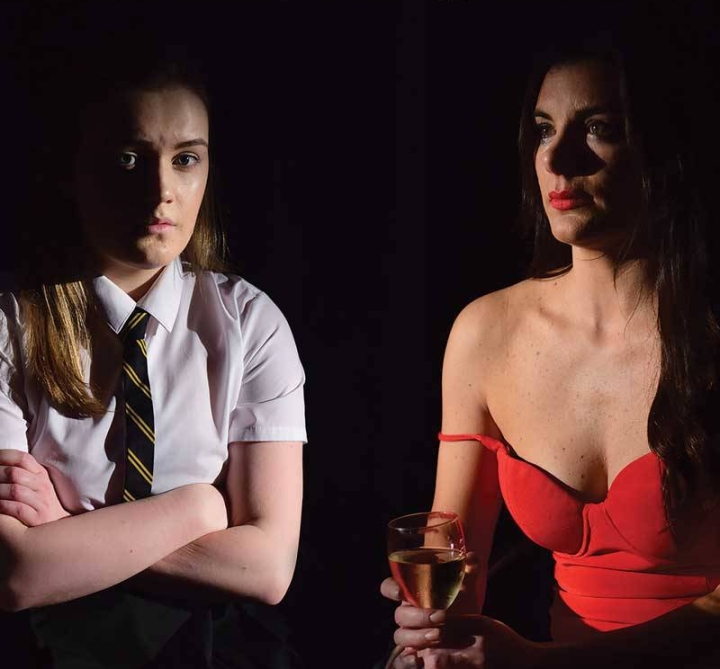 Anna Jordan’s ‘Freak‘ is a fiercely forensic examination of the pressures women face and the price they pay. It considers these issues through the lives of 15-year-old Leah struggling with her first serious relationship and 30-year-old Georgie at a crossroads after the end of a long-term relationship and the death of her father.

Leah is likeable, funny but still naive while Georgie is outwardly confident and worldly-wise. Both women obsess about how they look and how they are perceived by others. It’s a compact play tightly packed with ideas and themes. It touches on issues as diverse as acceptance, exploitation, consent, peer pressure, mental health and family. While there are no male characters on stage their presence is felt throughout – their expectations of women, their subtle manipulations, their pack mentality, their commodification of the female body and their economic power.

We meet Leah and Georgie as two disconnected women, each in their own individual bedrooms. They tell their stories separately at first. Then they stand side by side and alternately share details of a pivotal experiences in each of their lives – a fumbled intimate first encounter contrasted with something much more messy and increasingly horrific. As these stories converge, the women find themselves in each others lives and we discover a connection between them. Their conversations bring a change of pace and create a more hopeful space. An initial awkwardness becomes an increasingly warm bond between them and the two women open up to each other about worries they have previously wrestled with alone.

Anyone who saw Anna Jordan’s Bruntwood Prize winning ‘Yen’ will recognise her concern for those at the margins and on the edge, as well as the incredible ability to make everyday language brutally poetic. The quality of the writing means Leah and Georgie are fully formed complex characters. The situations they find themselves in are believably ordinary but the subtlety of Jordan’s focus brings depth and meaning to their experiences and dilemmas.

‘Freak’ avoids creating easy answers or oversimplifying issues. Men are never portrayed as caricatures but as flawed human beings as prone to pressure from society and their peers as women are. Nor is there a handy sisterhood to fall back on. There are hints at the way women can and do support each other but in these lives it is misunderstood or neglected.

The simple unfussy staging keeps the focus tightly on the writing and performances. A bed dominates the stage, its clutter and disarray reminiscent of Tracey Emin’s famous work. It’s an apt setting, the most personal of spaces – where you can often be alone and vulnerable. Like some digital male gaze, computer screens crowd the stage – looking towards the characters and their bedrooms – a reference to the magnifying effect that technology and social media has on so many of the issues explored.

Stacey Harcourt as Leah creates a warm, funny young woman whose mind is swimming with questions about the adult life she is on the brink of. It’s a touching and charming performance. Alexandra Maxwell has, perhaps, the tougher job. She convincingly takes us on a journey with a woman who can expertly sum up someone else in three words but can’t understand or openly articulate how broken she feels inside. It’s a genuine rollercoaster of a performance. You want to look away as Georgie’s deluded confidence glosses over a desperate descent in to crisis. It’s a powerfully contained performance packed with painful understanding but seeking neither pity or sympathy.

53Two and MAP deserve credit for giving Manchester audiences an opportunity to experience ‘Freak‘. The production and its two incredible performances do full justice to a powerful piece of writing that combines a rawness and willingness to dig deep with both humour and humanity.

One thought on “Freak”