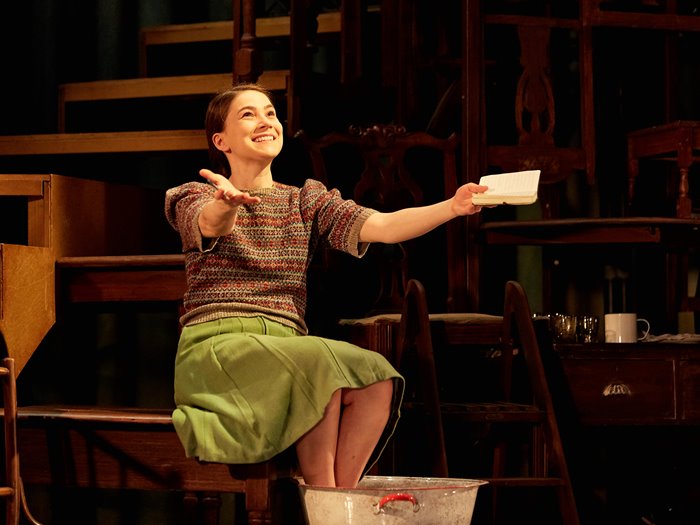 As Brigid Larmour’s new production of Dodie Smith’s much-loved novel begins, 17 year old Cassandra is writing her diary both sitting in and singing in the kitchen sink. The story of two sisters growing up in an impoverished and chaotic Bohemian family in the 1930s has not just been pulled from page to stage – it has also become a musical.

Designer Ti Green’s ‘castle’ – a towering heap of old wooden furniture stacked (as if for sale) right up to the Octagon’s ceiling is an attention-grabbing setting. As the cast emerge from within, it’s quickly established that the Mortmains aren’t exactly flush with funds. When two wealthy American brothers move in next door, Cassandra and her flighty sister Rose conveniently find themselves the centre of attention. Gifts of food parcels, old fur coats and trips to the seaside soon lead on to romantic entanglements. Larmour puts the sisters’ struggles to be true to themselves centre stage as they wrestle with dilemmas about the nature of true love. This thematic focus is often at the expense of the book’s more spiky elements. Certain characters just disappear in to the background. When father James Mortmain pleads with wife Topaz through song to retain her uniqueness it’s difficult to know what he is on about based on the bland character encountered on stage. Similarly Mortmain himself, previously imprisoned for attempting to stab his first wife with a cake knife and struggling with writer’s block, just comes across as a grumpy old man wearing a blanket.

The script by Teresa Howard is genuinely problematic. It is perhaps understandable that characters are ditched (younger brother Thomas) or soft-focused to fit within time constraints but it’s more difficult to comprehend why key plot moments are fumbled. Rose’s initial embarrassing behaviour in front of the newly arrived Americans is confusingly glossed over; and when Cassandra makes such a fuss (and a song and dance…) about successfully forcing her father to begin writing it feels less of a triumph as his predicament has been explored so fleetingly previously. The adaptation offers slimmed down pickings for both those familiar with the book and anyone new to the story. It’s a cosy and simplified version of the novel, ironing out a lot of the eccentricity that makes the Mortmains so interesting as a family.

Fortunately there is something rather charming about Steven Edis’s music. Carried along by piano and strings, it feels very much of the period and has a grace and romanticism to it. There are also neat contrasts between the folk music elements that accompany Cassandra’s family and the more jazzy swing stylings that arrive with the new American neighbours. Some of it can slip by in a swoon, other tunes linger and you suspect would benefit from a further listen. The more witty Cole Porteresque songs jump right out at you.

The graceful fluidity of the music is not matched by the accompanying ‘movement’. Individually and in small groups the shuffling and arm-waving has its place but when it comes to some of the score’s bigger numbers the loose informal approach creates some seriously sluggish group sequences which really need sharpening up and energizing.

Similarly the two actors playing the rich American brothers visibly struggle with their accents resulting in poor clarity and projection in both speech and song. Conversely the more experienced Julia St John (Mrs Cotton) and Shona White (Leda) have no such problems, striding across the stage and taking the worldly-wise song ‘Only Men’ and giving it everything they’ve got in one of the show’s standout moments.

Lowri Izzard and Kate Batter as the two sisters and Isaac Stanmore as the family’s saintly protector Stephen do some sterling work together. Their lightness of touch manages to give the production a tingling freshness. Their youthfulness underpinned by a convincing yearning for something more in life. Izzard is a cracking Cassandra, gradually growing in to adulthood and steering those around her in to making better decisions.

There is no doubting the hard work and commitment of those involved. The clever music and sparky cast serve Larmour’s production well and it’s clear there is a genuine love of the book. Sadly something has been lost in translation. Too often, this version of the story feels inconsequential, condensed down to a syrupy sweetness, leaving you longing for something more substantial and with a bit more bite.