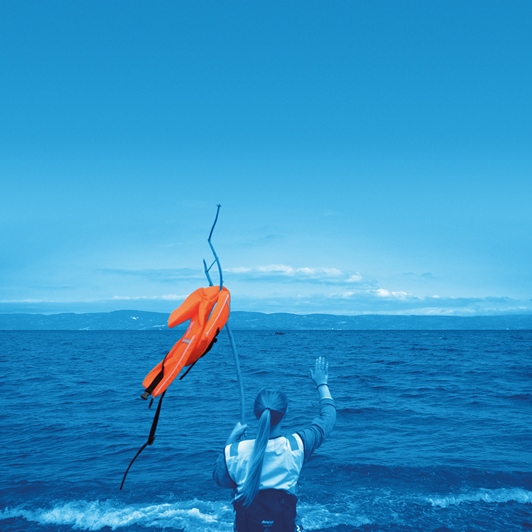 A doomed love affair between Zeus, a god, and Io, a woman turned into a cow, may be the stuff of Greek legend but this tale of their descendants feels as if it has been cut and pasted straight from today’s news sites. Like a dispatch across the centuries the play opens with a traditional libation as a civic leader circles the stage pouring wine on the ground but as the story unfolds the ancient context becomes increasingly superfluous.

Fleeing forced marriages a group of women take to the seas and travel from Egypt seeking refuge with the people of Argos with whom they claim a familial bond. From the moment they arrive there is much debate. People talk of oppression, call for asylum, marvel at democracy, demand power for women and fear for the future. Sometimes we hear individuals, such as the troubled king or the calming father, but otherwise it is the sound of the crowd. Their voices are loud, insistent, overlapping and united.

David Greig’s adaptation is fresh, the language clear and simple, spoken with directness. The words are gifted added power by an incredible musical accompaniment. Drums, percussion and recreated ancient windpipes propel the action forward with surprising energy and pace.

Visually the production benefits from the many people on stage – the community chorus moving as one like a ship cutting through the waves, dancing a celebration in wide circles or massing closer together in fear. Spectacle is conjured from the simplest of things. Sticks tied with white ribbons and glowing lanterns are formed into striking shapes, clusters and patterns. At one point black scarves are laid down, casually forming the shape of cow Io and the women recline and relax within her reassuring folds.

For all the openness of debate on many issues that still resonate today, one topic is in full sight for us but is not something that Aeschylus would have considered. In a world of zero hours contracts, gig economies, fat cats and unpaid internships what are we to make of a theatre culture that relies on a stage full of volunteers (and only three paid actors) to mount such an ambitious production? Oh Zeus give us an answer!

The morals of using community choruses, like the question of what happens next in Argos, is a discussion for another day. Although we know that Argos will be invaded and fall, that subsequent play lies in fragments of parchment somewhere lost to history. Instead, for now we get to see a dramatic journey ending with the unwanted Egyptian suitors vanquished and the women welcomed in to the city by nervous citizens. As the lights go down we hear their final impassioned shouts of defiance – asserting their rights to be free.